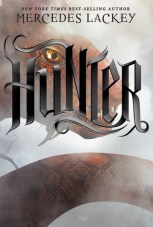 ‘I guess whatching practically everything I did, at least in public, made people think they’re somehow part of your life and entitled to know more about it.’
- page 191

They came after the Diseray. Some were terrors ripped from our collective imaginations, remnants of every mythology across the world. And some were like nothing anyone had ever dreamed up, even in their worst nightmares.
Monsters.
Long ago, the barriers between our world and the Otherworld were ripped open, and it’s taken centuries to bring back civilization in the wake of the catastrophe. Now, the luckiest Cits live in enclosed communities, behind walls that keep them safe from the hideous creatures fighting to break through. Others are not so lucky.
To Joyeaux Charmand, who has been a Hunter in her tight-knit mountain community since she was a child, every Cit without magic deserves her protection from dangerous Othersiders. Then she is called to Apex City, where the best Hunters are kept to protect the most important people.
Joy soon realizes that the city’s powerful leaders care more about luring Cits into a false sense of security than protecting them. More and more monsters are getting through the barriers, and the close calls are becoming too frequent to ignore. Yet the Cits have no sense of how much danger they’re in—to them, Joy and her corps of fellow Hunters are just action stars they watch on TV.
When an act of sabotage against Joy takes an unbearable toll, she uncovers a terrifying conspiracy in the city. There is something much worse than the usual monsters infiltrating Apex. And it may be too late to stop them…

Something new from Mercedes Lackey! So exciting!! And it has the best word in the world in it. Bamphed. Say it out loud, go on! Amazing word.

Mercedes Lackey is one of my favourite authors, so I was crazy excited when this book hit the scene. I was lucky enough to be ahead of schedule so I was able to read it as soon as it turned up! The most disappointing part was that it’s part of a series, but I didn’t fully know this till after. I thought it would be, the world was far too big to be anything but, but I sort of hoped…because sometimes you want to have all of it right away.

To become a Hunter, something happens to you. You gain magic and a pack of Hounds become yours. Vaguely dogish, they tend to be massive and have different features. Some have wings, some look like wolves, some bamph…
To have magic without Hounds is not impossible and there are also Psimons – psychics.
The badguys come in various forms – some from mythology and nightmares, other are too horrible to comprehend.

I liked how Joy compared things in her world to things of the past so that we’d know what things looked like, sounded like etc. And how some things had become slightly off – so the Christian faith was the Christer faith and so on. She’s an outsider coming in to the city so we’re learning along with her. The situation she’s in is a little ridiculous, but actually pretty close to current society, if this Disarray actually ever happened, this is completely plausable.

As always, it’s hard to fully review an intro book because the crucial point is where it goes from here. The next part of Joy’s story should be pretty fantastic too. I’d like to say this story reminds me of her Dragon Jouster series, but only the smallest amount. Kiron knows what he brings to the table where as Joy is only just beginning to realise her situation.

I’m recommend this book to people who like action books, who’ve enjoyed her other series and who like book with little romance. As yet there’s nothing about the rest of the series, but I can’t wait!