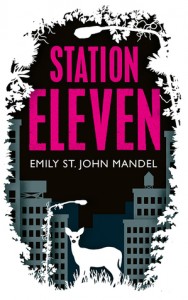 Thank you to Netgalley and the publishers for giving me a chance to read this book in exchange for an honest review.
Publish Date: 10th September 2014

DAY ONE The Georgia Flu explodes over the surface of the earth like a neutron bomb. News reports put the mortality rate at over 99%. WEEK TWO Civilization has crumbled. YEAR TWENTY A band of actors and musicians called the Travelling Symphony move through their territories performing concerts and Shakespeare to the settlements that have grown up there. Twenty years after the pandemic, life feels relatively safe. But now a new danger looms, and he threatens the hopeful world every survivor has tried to rebuild. STATION ELEVEN Moving backwards and forwards in time, from the glittering years just before the collapse to the strange and altered world that exists twenty years after, Station Eleven charts the unexpected twists of fate that connect six people: famous actor Arthur Leander; Jeevan – warned about the flu just in time; Arthur’s first wife Miranda; Arthur’s oldest friend Clark; Kirsten, a young actress with the Travelling Symphony; and the mysterious and self-proclaimed ‘prophet’. Thrilling, unique and deeply moving, this is a beautiful novel that asks questions about art and fame and about the relationships that sustain us through anything – even the end of the world.

Does anyone else remember the 2008 BBC series Survivor? Probably not… Well, in case you do, Station Eleven is like the better US version of Survivor.

Station Eleven is primarily a tale of survival. Its how people continue on after some epic, life-changing event. In this case a flu pandemic that kills 99% of the population of the globe! (So seriously epic!) It starts with the death of Arthur Leander, an actor, who surprisingly has a heart-attack in the middle of his performance of King Lear. Although he has nothing to do with the pandemic (even though he died on the same day it broke out) it is this event that ties all the other characters together.

To start with I didn’t really appreciated how this story was told. It’s not told in a chronological way but in an odd jumping back and forth in time way. I was frustrated when it jumped away from the story about Kirsten (20 Years after the ‘Collapse’) to reminisce about some (what seemed to be) non-event in Arthur Leander’s life (15 Years pre-Collapse). But, I was wrong to judge this so harshly. It soon became evident that Emily St John Mandel is a very clever writer indeed. She reveals small bits of information to us, at just the right time so you don’t realise its significance till the very last moment. It really makes you realise that no matter how mundane, every moment is important in a persons life, it makes you who you are and determines the direction you take for the rest of your life.

I preferred the story-lines that followed Kirsten and the Travelling Symphony and the storyline about Jeevan, the wannabe Paramedic who, in the opening chapter, tries to resuscitate Arthur Leander.  I think it was because these story-lines seemed more exciting than the others. They were obviously dangerous rather than mundane everyday events. Although, I did love Miranda and Clark too. Every character was just so believably human. And I liked that they all made good and bad choices along the way. Its been a long time since I’ve read a believable dystopian story.

By the end I was just bowled over by how cleverly and intricately all of their stories had been weaved together that I couldn’t give this book any less than 5 stars. I flew through it in one day! My advice to you though would be, don’t read it when you have a cold, like I did, I started to get a little paranoid!