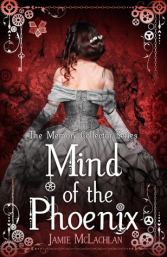 Thank you to Netgalley and the publisher for a chance to read this book in exchange for an honest review.
Published: 28th September 2015

Moira is a powerful empath, a psychic graced with the ability to read emotions and memories. Her skill is as much a curse as a gift, for in the harshly stratified city of Braxton empaths are slaves. Clever and beautiful, Moira has learned to rely on no one but herself. Determined to escape life as a concubine, she kills her master, and is imprisoned for the crime.
This could be the end for Moira, but the government has need of her skills. A mysterious serial killer known as the Phoenix has been planting suggestions in his victims’ minds that drive them to murder and suicide. To gain her freedom, Moira partners with Keenan Edwards, a handsome young detective, to stop the killer.
Hunting the Phoenix will bring Moira on a more dangerous road than she imagined, forcing her to confront dark minds, twisted moralities, and her growing feelings for the detective.

I ended up enjoying this book far more than I thought I would. It’s slow to build and the first in a series of unknown length, sort of set in the Victorian era (Just two years after the estemed monach died) in a mystery location/one I can’t place, it sort of follows the feel of the time period; precise and step by step, not quite slow, possibly leisurely. I was annoyed with a few things, but I actually think they were character flaws and not writing flaws. Some are understandable, for example; a concubine in that time period would have been obsessed with how much everyone she meets desires her. She’s been brought up that way and that’s just how her life is. It’s also terribly annoying to read too.

My absolute favourite part of this book was her relationship with the Detective. You can sort of tell where things will go with the blurb we have, but this isn’t cheap and tacky love. Nor is it instalove. It’s a nice decadent slide into something sensual and I need more of it. What’s nice is that they’re both changing as people as their acquaintance continues and it’s just perfect and real. We know so little of The Detective too. In my mind, Keenan is just a sort of dark shadow shape with direct green eyes and it’s actually kind of sexy. I’m impatient for book two, not just because of their continued development as a possible couple, but because I really want to know more about Detective Edwards. Oh, yeah, and I want them to catch the bad-guy too.

Cleverly there was a sub-plot to this book too. So it’s not just the huge unsolved murder case going on. There’s a mini case too, which doesn’t actually swamp the story but nicely fills some gaps that could have been there. Though it could have perhaps done with starting a little earlier. A few earlier related deaths/attacks to create a slower build would have been perfect.

If you haven’t already guessed Keenan is my favourite character. We probably know more of him than I think but he still seems so mysterious. He’s honest and he cares and he’s not ashamed to admit when he’s been wrong. Plus he has a dimple.

This is a good story for those who like something slightly darker than happy-go-lucky and for fans of mysteries and thrillers with a supernatural twist. Possibly for NA/Adult audiences.