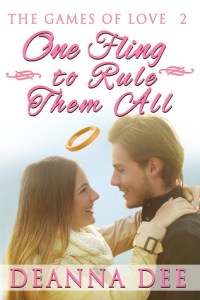 Title: One Fling To Rule Them All
Author: Deanna Dee
Publisher: Self Published
Book: #2 The Games of Love
Genre: YA, Contemporary Romance
Found: Provided by the Author
Rating: 3 Voodoos

My review of Critical Hit-On can be found HERE

It began with the forging of a great friendship.

For three months, Lydia Bell has watched Craig, her best friend and the love of her life, be in a happy relationship with someone else. But she’s over it. Or thinks she is until she hears Craig’s voice on the phone. Desperate to put her romantic feelings behind her, she joins her roommates for a night out. Maybe she’ll meet someone.

And meet someone she does—a guy named Scott, who looks a lot like Craig. Despite their awkward introduction, flaming arrows fly, and soon Lydia is running off the dance floor to get away from feelings she shouldn’t have. So much for getting over Craig, and so much for Scott.

Until Monday morning, that is. Turns out Scott goes to her school. Worse, they share a class. As if that’s not weird enough, Scott is also trying to get over someone. To help both Lydia and himself, he proposes a fling, and reluctantly, Lydia agrees. Now she just has to hope this fling rules and doesn’t crash into a fiery mountain.

One Fling To Rule Them All is the second book in Deanna Dee’s The Games of Love series and I was really happy to see that it continues on from Critical Hit-On. It’s not necessary to have read the first book, as it works well on its own, but I think, in order to understand and like Craig and Molly and the complex situation that exists between this small group of geeks, it is helpful to have read Critical Hit-On first. I would definitely recommend them as a set.

Lydia is trying to get over the feelings she’d had for Craig for practically her whole life. He is her best friend, the one who understands her inside and out, and the person she holds closest to her heart. After he met Molly though (in Critical Hit-On) Lydia feels that Craig is drifting away from her. They no longer share everything and Lydia feels rejected, replaced and most of all like her heart is breaking. In an attempt to avoid seeing the new happy couple, Lydia ditches her Marshalls and Magic’s game with her old friends to go out with her new Uni friends, to a night club, in search of a way of forgetting. And in walks Scott. Scott is also pining after a girl he can’t have, so together they hatch a plan, no strings-attached, “A Fling To Rule Them All”.

Unlike Critical Hit-On, this story is told from only one point of view, Lydia’s. I think this works really well for this story because you are left guessing what the other characters are actually thinking. Another difference is that this story concentrates solely on Lydia’s situation, there is nothing else but the complex situation between the characters and the building romance. I found the extra story-lines in the previous book a little distracting, especially as this novels are only short.

I definitely connected more with Lydia than I did with Molly. I felt Lydia’s pain in not being noticed, the way she wants to be noticed, by the person that held her heart. And if I’m honest I actually preferred Scott to Craig too, because I thought he had a better personality. I loved all the geek moments again, especially when they were playing Casters in Caverns, I really want to play this… apparently Harry Potter Universal has a similar interactive element where you can have special wands and you replicate the movements shown on plaques to unlock secrets! How awesome is that?! I think perhaps there were a few too many long games of Marshalls and Magic because I found them a little tedious this time round, possibly because I just wanted to see more of Lydia and Scott getting to know each other.

I enjoyed the ending. It seemed a little easy but at the same time it was fun and rounded off all the angsty things that had happened throughout the book, so I really can’t complain. Overall this was so much fun and I’m really enjoying this series so far. Can’t wait to see what happens next… possibly something with Parker… sorry Piff the Eviscerator! That would be cute.