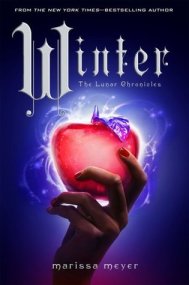 LOOK AT THE PRETTY.

It’s safe to say that we’re pretty excited about this book. AND IT’S NOW NOVEMBER!!!! For me, I’m super excited becaused I received an email informing me that my copy is in the post. IT”S IN THE POST!!!! (or at least it’s with the packing people) I have to warn you that every other book will be dropped and this series will be re-read as soon as it’s here. Actually I guess I need to be doing that BEFORE winter turns up don’t I? Better get on that right now! Haha, only joking. Maybe….

Marissa Meyer wrote a little Cinderella cyborg story in 2012, which was lovely and I knew nothing about. If you’re thinking CYBORG CINDERELLA?!?!?! Don’t worry, I did too. I was wrong. When I discovered it and gave it a chance some time last year, I burned through the entire series so fast I ended up having to do a series review for three novellas and the three novels; Cinder (Cinderella), Scarlet (Red Riding Hood) and Cress (Rapunzel) . Since then Fairest joined the group – a novella in book form that sits between 3 and 4. I’m yet to read Fairest, I was waiting for Winter.

I don’t want to try and explain the story for you, I can’t remember what’s secret and what’s not, so here’s Goodreads descriptions for all the shinys!

Humans and androids crowd the raucous streets of New Beijing. A deadly plague ravages the population. From space, a ruthless lunar people watch, waiting to make their move. No one knows that Earth’s fate hinges on one girl.
Cinder, a gifted mechanic, is a cyborg. She’s a second-class citizen with a mysterious past, reviled by her stepmother and blamed for her stepsister’s illness. But when her life becomes intertwined with the handsome Prince Kai’s, she suddenly finds herself at the center of an intergalactic struggle, and a forbidden attraction. Caught between duty and freedom, loyalty and betrayal, she must uncover secrets about her past in order to protect her world’s future.

Cinder, the cyborg mechanic, returns in the second thrilling installment of the bestselling Lunar Chronicles. She’s trying to break out of prison–even though if she succeeds, she’ll be the Commonwealth’s most wanted fugitive.
Halfway around the world, Scarlet Benoit’s grandmother is missing. It turns out there are many things Scarlet doesn’t know about her grandmother or the grave danger she has lived in her whole life. When Scarlet encounters Wolf, a street fighter who may have information as to her grandmother’s whereabouts, she is loath to trust this stranger, but is inexplicably drawn to him, and he to her. As Scarlet and Wolf unravel one mystery, they encounter another when they meet Cinder. Now, all of them must stay one step ahead of the vicious Lunar Queen Levana, who will do anything for the handsome Prince Kai to become her husband, her king, her prisoner.

In this stunning bridge book between Cress and Winter in the bestselling Lunar Chronicles, Queen Levana’s story is finally told.
Mirror, mirror on the wall,
Who is the fairest of them all?
Fans of the Lunar Chronicles know Queen Levana as a ruler who uses her “glamour” to gain power. But long before she crossed paths with Cinder, Scarlet, and Cress, Levana lived a very different story – a story that has never been told . . . until now.
Marissa Meyer spins yet another unforgettable tale about love and war, deceit and death. This extraordinary book includes full-color art and an excerpt from Winter, the next book in the Lunar Chronicles series.

Princess Winter is admired by the Lunar people for her grace and kindness, and despite the scars that mar her face, her beauty is said to be even more breathtaking than that of her stepmother, Queen Levana.
Winter despises her stepmother, and knows Levana won’t approve of her feelings for her childhood friend–the handsome palace guard, Jacin. But Winter isn’t as weak as Levana believes her to be and she’s been undermining her stepmother’s wishes for years. Together with the cyborg mechanic, Cinder, and her allies, Winter might even have the power to launch a revolution and win a war that’s been raging for far too long.
Can Cinder, Scarlet, Cress, and Winter defeat Levana and find their happily ever afters?