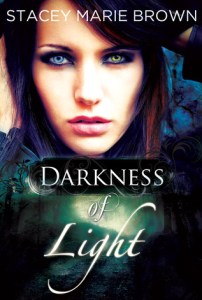 ‘His voice brought me back to reality. “You know I’m an ass, so did you really expect anything less?”
“No, You’re right.. I wouldn’t want you to be anything less than the true asshole you are.”‘ Loc 1394

Thank you to Netgalley and the publishers for a chance to read this in exchange for an honest review.
RE- Published: 9th January 2015 (original published 13th of February 2013)

I’d like to just point out that Darkness of Light is currently free on the Kindle at Amazon.co.uk so please go grab it while you can!

Ember Brycin has been called them all. She’s always known she’s different. No one has ever called her normal, even under the best circumstances. Bizarre and inexplicable things continually happen to her, and having two different colored eyes, strange hair, and an unusual tattoo only contributes to the gossip about her.

When the latest school explosion lands her in a facility for troubled teens, she meets Eli Dragen, who’s hot as hell and darkly mysterious. Their connection is full of passion, danger, and secrets. Secrets that will not only change her life, but what and who she is—leading her down a path she never imagined possible.

Between Light and Dark, Ember finds a world where truth and knowledge are power and no one can be trusted. But her survival depends on finding out the truth about herself. In her pursuit, she is forced between love and destiny and good and evil, even when the differences between them aren’t always clear. At worst, she will incite a war that could destroy both worlds. At best, she will not only lose her heart but her life and everyone she loves. Once the truth is out, however, there will be no going back. And she’ll definitely wish she could.

This was fun, fast paced and held lots of suspense that kept me reading to the very end. I don’t really know what I was expecting when I picked this up but this is my second re-release this year (the other being Queen of Blood) and I’m not entirely sure why either of them haven’t had more recognition before, as I have really enjoyed them both.

Darkness of light begins at a school dance which comes to an abrupt end when the school catches fire and everyone has to be evacuated. With fowl play suspected all attention turns on Ember. Ember constantly finds herself at the center of ‘accidental incidents’. The kind that end with all the lights exploding or the ground to shake. Coincidence?? It’s hard to believe so. Especially with so many disasters… Add to this Ember’s strange appearance (two different coloured eyes and brown hair with red streaks) and its surprising that no one thought to lock her away earlier. With very little evidence the Head Master suspends Ember and the Sheriff has her on community service. Because of this Ember finds herself at Silverwood, a school for troubled teens. But not everyone is who they seem. And Ember soon finds her self in deeper waters, surrounded (it seems on all sides) by strange men. Ember must figure out who she truly is before something worse happens.

I really liked Ember as a character as she was quick witted and really snarky. I liked how this always seemed to get her into even more trouble, especially with people in authority. I didn’t get that people were supposed to be afraid of her. I think this is possibly because people were still getting in her face and trying to put her down. I would have thought you would avoid someone you were afraid of? Not confront them.

Darkness of Light has an underlying paranormal/fae storyline which is hinted at throughout, but primarily it focuses on romance. There are a two love interests and both a pretty damn hot! First there was Torin who can talk to Ember while she dreams. I wasn’t sure about Torin. We didn’t really get to see enough of him to really understand who he was, or what he wanted. I did however prefer and love her interactions with the mysterious and brooding Eli. Even though Eli kept running hot and cold, Ember always found a way to keep him on his toes and so it was hard to ignore the chemistry between them.  Eli was the typical bad boy character (which I not-so-secretly love!). He had the motor bike and leather jacket, and the I-don’t-really-care attitude. He reminded me a bit of Daemon from Obsidian by Jennifer L Armentrout.

There were a couple of things that annoyed me about this story and these really hindered my overall feelings for the book. One was how quickly Sheriff Weiss would jump to conclusions. He seemed to need very little evidence to have Ember arrested, on more than one occasion. (I am quite surprised he still has his job as he clearly doesn’t understand that HE is not the be-all-and-end-all of the law!) Second was how flat and one dimensional Samantha was. She came across as just a plot device. She was overly rude and seemed to be a bitchy female thrown in to create a bit more drama. Something to keep Eli and Ember apart for a little while longer. We don’t really get to know who she is and I don’t think she was really necessary. Perhaps she has a bigger role in a later book. The final and probably more substantial problem I found with the story, was that the secret behind what Ember truly was was hidden from us (and Ember), for a large proportion of the story. I don’t usually mind, but because certain characters (Torin and Eli namely) actually seemed to know who and what she was, it felt like they were flaunting the secret in front of us. It started to get a little infuriating because Ember seemed to be in more danger because she didn’t know.

Apart from these problems, I found the romance exciting and the storyline compelling and I really loved Stacey Marie Brown’s flowing and easy to read writing style. This is a series I will definitely be continuing. I’m off to find book two now!