by V B Marlowe 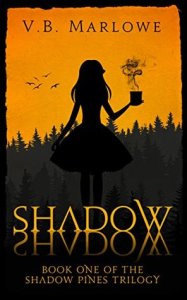 Thank you to Netgalley and the publisher for a chance to read this book in exchange for an honest review.
Published: 16th February 2015

‘Some people say the cult came back from the grave to exact their revenge on the town, but others believe that they were so evil, even Hell didn’t want them.’ Loc 1590

“The four of you have been blessed with a great gift. Well, it’s a gift for you, but a curse for someone else.” Harley receives a mysterious gift on her sixteenth birthday–a shadow box. The box gives her the power to trade someone to the shadows, meaning they will disappear and cease to exist. Harley can’t imagine doing such a horrible thing and is warned that using the box comes at a price. Unfortunately, not using the box can be even more costly. Harley must make this life-altering decision as she discovers frightening revelations about the town she calls home.

Four teenagers are given gifts that will change their lives forever. It is up to them whether that change is a good or a bad thing.

Shadow, Shadow is a gripping fantasy thriller that occurs in a small town called Shadow Pines. For years people have been disappearing with out a trace. No one knows why or who is doing it. But, on their sixteenth birthday, four teenagers find out the truth. They are invited to a toy store to receive a free birthday gift. Each of them receive a small box, with some instructions and a warning. Choose a person to sacrifice to the darkness, and that person will disappear forever, but if you don’t choose… then someone you love will be taken instead.

‘Someone you love or someone you hate. Who do you want the shadows to take?’ Loc 1525

The story is told from two of the teens points of view, Harley and Teaghan. These two girls are very different, Harley is loud and strong willed where as Teaghan is quiet with a stutter and is considered a loser because she has no friends. Both girls have lost their mothers but their losses have effected them in completely different ways. They have also both had quite a lot of other issues to deal with too. I enjoyed getting to know them both and seeing how the ‘gift’ changed them. It was great to see teens interact in a realistic way. They had believable worries and outbursts, and even their disagreements with their parents were well done. I could see a potential romance in the works for the next installment in the series but I was glad it wasn’t forced into this one. It’s given the opportunity to get to know each character on their own without the distraction of puppy love.

The story itself seemed quite straight forward as it followed Harley, Teaghan, Brock and Gianne, as they fight with each other and their consciences to decide who to sacrifice to the shadows. But i got the impression (especially towards the end) that there is definitely a bigger conspiracy/issue just waiting to be discovered. It makes me rather excited to continue with this series. I only issue I had was with how easily the four accepted everything Ava-Kaya said and how they didn’t seem to push for answers. Ava-Kaya would just say ‘I can’t tell you that’ and they would all say.. ‘oh ok then’. I would probably want to know more…

Overall this was short and well-paced. Definitely an interesting start to a series and I would like to see where it goes next.

NOTE: The rest of this trilogy are now available so if you are interested here are the links for Book 2 Moonlight and Book 3 Ember.