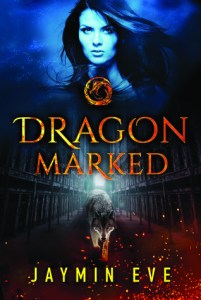 Thank you to Netgalley and the publisher for a chance to read this book in exchange for an honest review.
(Re-release) Published: 17th November 2015

As a wolf shifter with razor-sharp senses, Jessa Lebron can perceive the slightest change in the air. And her lupine instincts go into overdrive right before her mother, who abandoned her years ago, returns to the pack bearing secrets that change everything.

The biggest secret of all: Jessa is dragon marked, a designation that places her in grave danger. The dragon marked are destined to resurrect the dragon king, a fearsome ancient warmonger. And they must be eliminated.

Soon Jessa is locked up in Vanguard, the notorious paranormal prison that houses criminal vampires, feys, and magic users. Thankfully, she’s not alone: Braxton Compass, her best friend and a dragon shifter, has her back. Jessa and Braxton must find a way to free themselves and the rest of the dragon marked. But can her pack mates help her stop the dragon king before his deadly return?

I’m so sad. I really didn’t like Dragon Marked as much as I’d hoped too, mainly because it was nothing like I expected. I think the description given was very misleading. I presumed that Jessa would be arrested and taken to Vanguard very near the beginning of this book. I also thought there would be a lot of action scenes possibly broken up with some hot encounters with Braxton.

But what I got, for basically the first half of the book, was a lot of rather heavy descriptions of her society, the way it worked, who lived there, and why. I found out that Braxton Compass was actually one of four brothers, all of which seem to be very touchy feely and possessive of Jessa, and she seemed to flirt and encourage this behaviour. I didn’t really feel comfortable with this situation. It felt like she was leading them all on when she clearly preferred Braxton. I especially hated that she got really possessive of Maximus when her sister started to show an interest. If you don’t want him why can’t she have him?Jacob and Tyson seemed quite flat in comparison to Braxton and Maximus and kept calling her Jessa babe which was infuriating!!!

Jessa was a strong and feisty female character but for some reason whenever the Compasses were around she became all frail and girly. She spent a lot of the story being carried around or sleeping off something or other. And when she wasn’t sleeping or been rescued she was eating. The girl definitely liked to eat! She also went on a really weird date with a sorcerer who apparently knew her grandparents and had helped protect her as a baby. This was a weird relationship but worked to link the story together.

It was only around 80% that Jessa finally found herself arrested and taken to Vanguard. This was about the time that the story picked up. There was a lot of fights between Jessa and the other cellmates and there were hints at some chemistry beginning between her and Braxton.

I was disappointed that the romance didn’t really progress at all! Jessa didn’t seem to reciprocate any of the FIVE males feelings, well that’s not completely true, she did think about kissing Braxton at one point, but mostly she seemed more excited by the promise of cake than kisses.

There were moments when i saw promise in the overall plot, especially towards the end. And don’t get me wrong, there was definitely potential in the complex world Jaymin Eve created, but for me, the story felt unbalanced. There was just too much telling rather than showing, the romance was lacking something and I really wanted more of the supernatural elements, especially more about the Dragon Marked and the Dragon Marked Hunters (who only showed up at the very end).

I’m sorry to say, I don’t think I will be continuing this series, not unless I see some really exciting reviews from people I have similar tastes to.