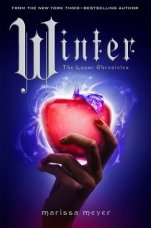 “Careful is my middle name. Right after Suave and Daring.”
“Do you even know what you’re saying half the time?”
- page 577

Princess Winter is admired by the Lunar people for her grace and kindness, and despite the scars that mar her face, her beauty is said to be even more breathtaking than that of her stepmother, Queen Levana.

Winter despises her stepmother, and knows Levana won’t approve of her feelings for her childhood friend—the handsome palace guard, Jacin. But Winter isn’t as weak as Levana believes her to be and she’s been undermining her stepmother’s wishes for years. Together with the cyborg mechanic, Cinder, and her allies, Winter might even have the power to launch a revolution and win a war that’s been raging for far too long.

Can Cinder, Scarlet, Cress, and Winter defeat Levana and find their happily ever afters?

Winter had a lot to live up to, I was so excited to read it. But I actually feel disappointed right now and I can’t completely fathom why. Was it too long? Or is it just because it’s all over?
I believe I’ve mentioned this in an earlier review for one of the books in this series, but things were beginning to happen almost as if they were just there to drag it out and I most definitely found a few moments in this book that made me feel like that again. I know there was a revolution going on and that these things take time, but this book has taken me almost 3 times as long to read than an average book and while I love reading that’s a lot of time to dedicate to one book. I’ve literally just finished and the thought of re-reading it again someday is rather daunting.

But I’m sure as time progresses, I’ll remember all the cute bits, the funny bits and the breath taking bits and the idea of re-reading it wont be so terrible after all.

It didn’t seem like we spent enough time with the book’s namesake either and I was surprised when I noted towards the end, the mention of her dark skin. Not that I have anything against a main character or even a princess having dark skin, indeed Meyers books are refreshingly diverse, it was just – out of all the characters in the books – she chose the character representing the fairytale character known for her pale pale skin to be the one with the darkest. I don’t even know where it came from either. But then I wasn’t particularly paying attention to that sort of thing until half way through the book because that’s when I was looking up the lunar chronicles on Pinterest and found pictures of Winter with dark skin and it confused me because I’d spent all that time assuming she was as pale as the legend she was moulded after. However, I checked Fairest and when her father is introduced, it does say he had ebony skin and her mother had honey skin or something like that, so that’s what I get for paying attention. Here’s hoping they keep the diversity from the books when translating it to film. Hopefully every curl will be in place too and there will be no brushing of them!

While we get a nice sort of wrap up for scarlet and wolf and for Thorne and Cress, with Cinder and Kai and definately with Winter and Jacin, it seemed far more vague and while the book couldn’t stand being any longer, I wish there was more at the end. More after, more sorting, more happy. Especially with that second last bit there Cinder…(Though I don’t see how different that would be, a group can be just as easily controlled…)

In the end, much to my surprise my absolute favourite characters were Thorne and Cress. This was not something I entertained when I first met Thorne. Or even when I first came across Cress and her crush on a Thorne that didn’t exist. But while on pinterest and I found a pin where someone pointed out that while Thorne was all about appearances he fell in love with Cress while he was blind. He loved her for who she was, not what she looked like and he even tried to become the man she’d thought he was at the start, though she’d fallen in love with the actual him by then and I thought that was the best character development throughout the whole series.

I was surprised to see in the acknowledgements – something I rarely read, bad I know – about the Sailor Moon fanbase and it made me wonder, were these books borne from a love of Sailor Moon?!  I almost want to read them again, just to see if I can see any similarities, as a Sailor Moon fan myself! But maybe another year…