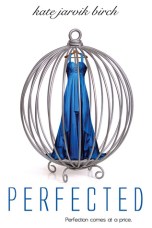 “I could be a mechanical girl as easily as I could be a living one. All that mattered was how things looked on the outside.”
- 34%

Perfection comes at a price.
As soon as the government passed legislation allowing humans to be genetically engineered and sold as pets, the rich and powerful rushed to own beautiful girls like Ella. Trained from birth to be graceful, demure, and above all, perfect, these “family companions” enter their masters’ homes prepared to live a life of idle luxury.
Ella is happy with her new role as playmate for a congressman’s bubbly young daughter, but she doesn’t expect Penn, the congressman’s handsome and rebellious son. He’s the only person who sees beyond the perfect exterior to the girl within. Falling for him goes against every rule she knows… and the freedom she finds with him is intoxicating.
But when Ella is kidnapped and thrust into the dark underworld lurking beneath her pampered life, she’s faced with an unthinkable choice. Because the only thing more dangerous than staying with Penn’s family is leaving… and if she’s unsuccessful, she’ll face a fate far worse than death.
For fans of Kiera Cass’ Selection series and Lauren DeStefano’s Chemical Garden series, Perfected is a chilling look at what it means to be human, and a stunning celebration of the power of love to set us free, wrapped in a glamorous—and dangerous—bow.

This is one of those books that is scarily possible. Because humans don’t learn from their pasts and some people would believe that ‘grown’ humans aren’t people. The ‘pets’ only seem to be female too – which isn’t too much of a surprise considering how much more objectified women are to men in our societies. Plus it seems to be the creepy old men in power that spearheaded it all.

One of the worse things seems to be how under prepared for the world they are. Did their ‘handlers’ actually believe all their own propaganda or did they truly not care?

I liked the writing style and the story moved quickly. It had a simple feeling while not being condescending – though I’m pretty sure money and dresses and shoes were left all over the place…

The ending is a bit cliffy and there’s going to be issues. But I can hold out for her learning to live and him going off and doing what his father says then BOOM changing all the laws and them having a HEA, right? Right?

A good start to a series with an interesting idea. I cant wait to see where it goes from here. With the ‘future’ us get worse or better?!