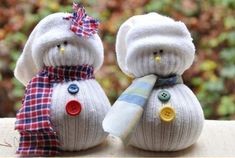 “Tis the season…” well, tomorrow it is. Shhh

original pin links to the blog above.

So to make yourself some sock snowmen you need a few items. Topping the list are some NEW white socks. No smelly old ones. You also need elastic bands, fabric and buttons. Oh and rice. Don’t forget the rice.

And you’re done! No really. The rest is just costume. Fold up the cut part of the foot of the sock and add it as a hat. Cut a strip of fabric and make a scarf.

In the original they made the face out of pins and added buttons as their…well…buttons. I used buttons for their faces and got bored of sewing them on so they didn’t actually get buttons. But they don’t need them – it’s too cold to get undressed! I did sew their hats on too, I dodn’t want them to lose them. 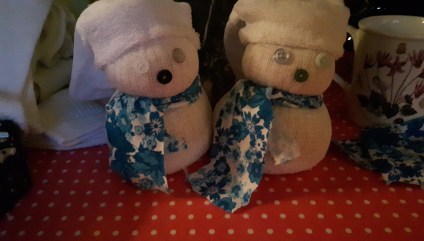 I quite like these but I think a smaller pair of better quality socks would have looked far better. And cuter too! but they hardly took anytime at all. And if you swap the sewing with (supervised) glue-gun glue, a nice craft for children too!