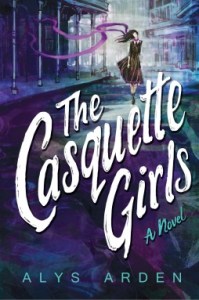 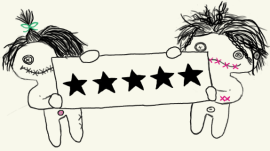 Thank you to Netgalley and the publisher for giving me a chance to read this book in exchange for an honest review.
Published: 17th November 2015

‘Every single thing the Joneses owned had been destroyed. The furniture was scattered upside down, chunks of drywall vomited from the walls, and the fan hung dangerously low from the living-room ceiling. nearly the entire ground level had been submerged.’ Loc. 3189

In a post-storm New Orleans, Adele is haunted by myths, monsters, and her own family’s secrets.

After the storm of the century rips apart New Orleans, sixteen-year-old Adele Le Moyne and her father are among the first to return. Adele wants nothing more than to resume her normal life, but with the silent city resembling a war zone, a parish-wide curfew, and mysterious new faces lurking in the abandoned French Quarter, normal needs a new definition.

Strange events—even for New Orleans—lead Adele to an attic that has been sealed for three hundred years. The chaos she accidentally unleashes threatens not only her but also everyone she knows.

Caught in a hurricane of myths and monsters, Adele must untangle a web of magic that weaves the climbing murder rate back to her own ancestors. But who can you trust in a city where everyone has secrets and keeping them can mean life or death? Unless…you’re immortal.

- Netgalley (I prefer this description)

The Casquette Girls is a beautiful blend of real life and paranormal fantasy. It was captivating and exciting and I thought it was pretty much perfect!

Adele Le Moyne and her father are among the first to return home after a devastating storm has ripped its way through New Orleans. As they try to repair and rebuild their small part of the City, Adele accidentally breaks a part of a spell that her ancestor put in place to protect everyone. Now faced with a rising death toll, Adele must uncover the secrets of the past, and find a way to stop the murders. But what she discovers leads her to the realization that some monsters truly do exist. Adele must embrace her powers whilst searching for others like herself. Its the only way to save the ones she loves.

Alys Arden has a gorgeous writing style that paints the most vivid pictures. From the very beginning Arden’s descriptions drew me in. It was very easy to imagine the complete destruction left behind after the huge storm and how utterly devastating it was for the characters, to see the place they loved, changed forever. I don’t think there was a signal character that I didn’t like. They all had a role to play, no matter how small. It was so clever how the past and present were tied together. One part that caught me off guard was the police officer’s role. I found him irritating because I couldn’t figure out why he was constantly accusing Adele without any real proof. It’s only as you start to understand the past that you see why! Very clever! Very clever indeed.

I was surprised to find out this book was all about witches and vampire and curses. I don’t know why, I guess I didn’t really read the description before I started. Either way, when everything started to happen I wasn’t sure what was really happening, and that was great because it made it feel more sinister and threatening! It had me thinking about when we had our house broken into and I had that horrible feeling of betrayal and that no where was safe. It was very powerful and I had chills! I just had to keep reading!

I feel it best to warn those of you that hate a love triangle, that there is one in this story, but I found it to be well developed and therefore worthwhile. Adele’s split affection, made her feelings cloud the way we saw both of the men. This, plus the fact that they were both very secretive, made it hard to figure out who was lying and who was telling the truth. Who could Adele trust?!!! Everyone, and I mean EVERYONE seemed to be hiding something from her and it made this mystery just that much more exciting.

I thoroughly enjoyed every minute of The Casquette Girls so I can’t wait for book two. I truly hope we will discover a few more members of the Coven and I would love to see how Adele’s powers evolve. I don’t think we’ve seen the last of the Medici family, not at all!

2 comments on “Review: The Casquette Girls”