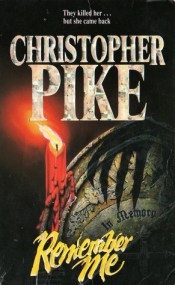 “They killed her…but she came back.”
-Tag Line

SHE DIDN’T UNDERSTAND THAT SHE WAS DEAD.

When Shari Cooper awoke at home after being at her girlfriend’s birthday party, her family acted like she wasn’t there. They didn’t hear a thing she said. They wouldn’t even look at her. Then the call came from the hospital. Her father and brother paled. Her mother started to cry. Shari didn’t know what was wrong. Not until she followed them to the hospital. There she found herself lying on a cold slab in the morgue. The police said that it was suicide.

Shari knew she had been murdered. Making a vow to herself to find her killer, Shari embarks on the strangest of all criminal investigations: one in which she spies on her friends, and even enters their dreams — where she comes face-to-face with a nightmare from beyond the grave. The Shadow — a thing more horrible than death itself — is the key to Shari’s death, and the only thing that can stop her murderer from murdering again.

Christopher Pike was the perfect teen read. There was horror and sex and people were often pretty frank. Unlike today’s teen books where no-one is frank and there’s no sex…there are arguable more love triangles too. But that’s irrelevant to this book.

I could go on about his books in general for a while here, but I’m meant to be focusing on this one as it’s one of my favourites.
I remember reading it and loving it and finding out it was part of a series years later. I don’t know if the disjointedness of the set is because of that large gap or if it’s because the first was originally a stand alone. We’ll never know.

Shari’s convinced she didn’t commit suicide, if only she could just remember.  She begins to remember as the story goes on, but she’s got to keep away from the Shadow! The suspense and the mystery are pretty high in Christopher Pike books and this one is no different. I have noticed – from the one’s I’ve read, they either are full blown teen horror or they cover spiritual elements. This books is in the horror spectrum, but then it involves a ghost so you could argue it covers both. The later books from this set presented an interesting theory on the earth and who was being reincarnated and for why and I actually fully love it. Some variation of that seems rather sound too, it’s scary. But book 2 and 3 certainly seem to be separate.

Now this whole book is a who-dunnit and I’m not giving that away so I can’t say much. Except it wasn’t Peter. I can say this for sure because at the time he was already dead. Unless that wouldn’t stop him….His role is pretty interesting though, so don’t ignore him!

And I have to say, I prefer this cover a lot more than the re-pub ones, they’re all people behind veils and are oranges or greys or purples. Sounds like a metaphor…

Have you read any Christopher Pike books? Which is your favourite?