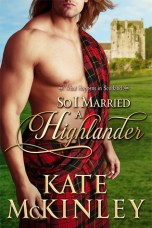 Thank you to Netgalley and the Publisher for giving me a copy of the book in exchange for an honest review.
Published 30th October 2015

A Lady’s Rules of Etiquette When Eloping:
1. A lady should never leave a note behind explaining her intentions.
2. If by chance a note has been left behind, a lady must prepare to be hunted down and the ceremony thwarted.
3. In such a case, seeking consolation with a night of excessive drinking will be tempting, but ill advised.
4. And lastly, a lady must never, under any
circumstances, wake up manacled to a deliciously handsome Highlander.
Lady Evelyn Alexander has managed to break all four rules in the space of an evening—and the tall, virile Highlander she accidentally married is only the beginning. Her fiancé has also mysteriously gone missing and the threat of scandal is hot on their heels…
Alec McAllister has no use for a wife, but when he wakes up entwined with the lovely and spirited Evelyn, he’s willing to reconsider. He’ll help her find her fiancé, but when the passions ignite between them, it’s only a matter of time before the Highlander claims what’s his…

What?
When I picked this book up I was expecting a fair amount of ridiculousness. Also it’s should expect to be compared to Outlander by Diana Gabaldon  – purely because of the fact that Alec apparently speaks The Gaelic but all he ever seems to say is “Sassenach”. Ironically perhaps, “Plaid” is used just as much but it’s been used to mean tartan which it does NOT – it actually means blanket in The Gaelic. I was rather annoyed at this so I decided to be contrary and I looked up the McAllister clan. There isn’t one but apparently the name is connected to the MacAlister clan and their tartan is green and brown. At this point I’d headed out of annoyed into amused, which was lucky because everything else then seemed to go wrong.

The idea of this story was good and I was hoping for a good laugh and while it was amusing I think it was for all the wrong reasons. What bothers me most though is that we never find out what happened that night – the why of it as well as the WHEN and HOW??? And the ending. What was that?! Luckily her friend was sensible and answered her stupid question there because it was idiocy. And as to the other part of the ending? No. That was a cop out, she would have had to undo that particular snarl herself, though I guess it could have read “You need to come down here right now and sort this and this and this.”   Also, Scotsmen drink whisky, not whiskEy, that’s Irish/American and different.

The book needed some serious beefing up. I guess it was meant to be all about the sex, but that wasn’t super exciting or prominent so perhaps I’m wrong. As I said – the why when and how of ‘that night’ would have been good. Also, more about Alec’s family and him. (I assume we learnt something of Evelyn in book 1 so that was my own fault) and a happy little epilogue too!

It was almost like the ending was saying “we’re going to have a HEA so NER!” and then that was it. I guess that there’s going to be at least two more books and their book may be mentioned in those as book 1 was in this (I read the chapters for that at the end of this and while it seems interesting, if it’s like this one I don’t want to read it)
Not my favourite, but once I decided to be amused I was amused indeed.

So not a book to read if you have any affiliation for Scotland and you get annoyed when people get the culture wrong. Also not a book for those who like accuracy.
Perfect if you’re looking for a silly little something to keep you amused that involves romance and TARTAN Kilts!