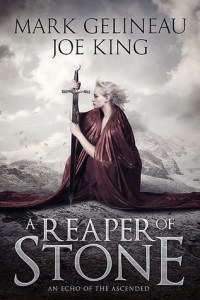 Thank you to Netgalley and the publisher for a chance to preview this book! Publish Date: 18th of September 2015

I was thoroughly surprised by how well this was written and how much thought had gone into the world-building and character development. It had all the key elements of a high/epic fantasy novel and even though it was only 90 pages long it still managed to pack a punch!

A Reaper of Stone begins with the first time Conbert and Elinor met and sets the characters up wonderfully. Elinor is a young orphan and a fearless cadet, determined to prove herself in a world full of snobbish and brutish nobles. Conbert is an older, kind noble who is surprised by how headstrong Elinor is, and learns quickly, to never under-estimate her.

Elinor is a strong and easily likeable character. It didn’t take me long to realise that she will be a firm favourite of mine. I wished there had been a little more insight into the old beliefs and how they influenced characters, such as Tae but it’s hard to do that in a Novella.  Although saying that, Mark Gelineau and Joe King did manage to create the most vivid depiction of the world within the same constraints, so perhaps it could have been done?

This series reminds me of some of my favourite fantasy series, Trudi Canavan’s The Black Magician and Frank Herbert’s Dune Chronicles to name but two!