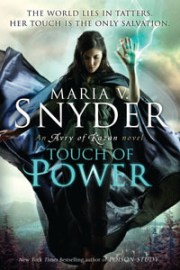 Avry is a member of a dying clan. As a healer she should be respected across the 15 realms. Instead, healers were blamed for the plague that wiped out most of each town, they were hunted down and killed. But Avry can’t stand by when she sees a sick child and willingly trades her safety for a child’s life. She’s saved from the guillotine by a group of men hunting for a healer to heal their prince; a man Avry has met before and despises. His life will mean her death, but can she really say no when he’s the only one who can help halt the state the surviving Realms are being cast into by a man who would rule them all?

In Touch of Power Avry has been on the run for roughly 4 years, since she was 16. She can hide and blend in with the best of them, but she’d no match for Kerrick who has an affinity with travelling silently through the trees. Both these main characters are smart and stubborn, though Avry seems to have more common sense and Kerrick seems to be a more headstrong. I feel like I’m going to miss these characters when I’m finished reading, I’m hoping I’ll like them as much as Valek and Yelena from the Study Trilogy (Of which there is going to be a second one WOOHOO!!!)
Even though I’d read the book before, I seemed to confuse it with another series as things I thought happened didn’t and gosh I really want to know what’s with the Lilys!!!!!

I pretty much love everything about Maria V Snyder’s writing. She always has a well-developed main cast. Her main couple never fall into ‘swooning heroine’ or ‘knight in shining armour’ stereotypes and they usually work together instead of getting in each other’s way, or worrying about their relationship. The worlds are always imaginative and vibrant, the mysteries or plights gripping. Happiness isn’t guaranteed, but there’s never any tragedy for tragedy’s sake.

I was able to read this book at a far more leisurely pace this time (3 days haha!), no crippling ‘must-know-what-happens’ madness, thank goodness as I had other things to be doing, but now I’m about to start book 2 and I might not sleep tonight, but oh well. Of course, there’s some of the usual book two apprehensions even though I know love triangles/pointless massive blow ups are not a usual Snyder pattern. I so hope she didn’t start doing it with this series!!!