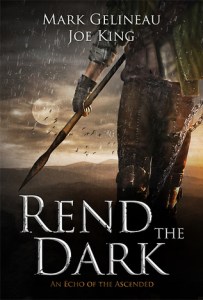 Thank you to Netgalley and the publisher for a chance to preview this book!
Publish Date: 18th of October 2015

This book was amazing! I think I actually enjoyed this one more than A Reaper of Stone. How Mark Gelineau and Joe King have managed to fit so much into such a short book is beyond me! It was powerful and creepy and had me completely hooked!

Rend the Dark is the second novella in the series An Echo of the Ascended. This series follows different groups of characters on different quests across a fantasy world called Aedaron. I presume we will have some cross overs from time to time (fingers crossed). It reminds me of Terry Pratchett’s Discworld series in that way, but this series is much darker, more like Grimm Fairytales mixed with epic fantasy, than satirical fantasy.

In this story we follow Ferran and Mireia who are from the Order of Talan, or ‘Witch Hunters’. They are among the few who can see through the illusions and see the darkness that is trying to consume everything. They fight the monsters that wear the faces of others! They have come to help The Warden Aker and two magistrates, Hil and Riffolk, to figure out why there are people disappearing from their region. But what they discover is worse than any nightmare.

This was wonderful. It gave me that wired feeling, and butterflies in my stomach, because I was that caught up in all the action. The whole story had this incredible medieval feel to it. It felt like a quest of the knights templar! The characters were yet again easy to relate too. I loved Hil and Mireia the most as they showed the most human emotions, fear, compassion and uncertainty. Ferran was a bit more cryptic but that was good, it made him seem mysterious and bold. It was all very exciting.

The paranormal aspect gave me chills. I can not tell you, and do justice to, how creepy it was! The setting and the creatures were described so vividly, I could imagine I was actually there! I will probably have nightmares for weeks.

This series really is just getting better and better. I’m going straight off to read book 3!