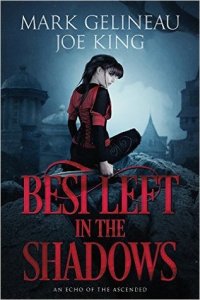 Thank you to Netgalley and the publisher for a chance to preview this book!

A Highside girl. Beaten. Murdered. Her body found on a Lowside dock. A magistrate comes looking for answers. For justice.

Alys trades and sells secrets among the gangs and factions of Lowside. She is a daughter of the underworld. Bold. Cunning. Free. When an old lover asks for help, she agrees. For a price.

Together, they travel into the dark heart of the underworld in search of a killer.

I can’t help it! I’m addicted! Best Left In The Shadows is the third book in An Echo of the Ascended and my third book in three days. This novella series is all set in a fantasy world called Aedaron, but each book follows different groups of characters in different stories. I love that this book had a completely different feel to the previous two. While A Reaper of Stone and Rend the Dark were more medieval knight/ epic fantasy stories, Best Left In The Shadows had a more Victorian Murder Mystery feel to it! It’s incredibly clever how Gelineau and King have managed to create very different characters and settings and yet somehow still manage to bring them all together and make it work as a set. If I had more than two thumbs they’d all be up!

Best Left In The Shadows follows a Magistrate (a detective of sorts), named Daxton and his investigation into the murder of a young women. The body of this young upper-class daughter has been found on the grimy streets of the crime infested Lowside, and Daxton finds he needs help if he is ever to uncover who’s responsible. Alys is the last person Daxton wants to ask for help from, but ask he does and together they search for the truth.

I think this was my least favourite of the series so far. That’s not to say I didn’t enjoy it, oh no, I definitely still loved this, its just to say I didn’t love it as much as the previous two. I missed the supernatural creatures that gave the first two such an amazing magical feel. But what Best Left In The Shadows lacked in supernatural qualities it made up for with a deeper look at the darker side of humanity itself. The story was filled with gritty characters and dirty back streets, lies and deception. There was also this great sexual tension between Alys and Daxton that created a witty banter, which was so much fun to read.

I loved that their roles were reversed. Daxton, the male, was the slightly naive one, hopefully and believed in love and happiness where as Alys, the female, was very cynical and street wise. It was very refreshing. The mystery itself was ok, but not the thing that kept me reading, that was mainly the relationships between the characters.

I’ll be interested to see what will happen next between Alys and Daxton, and hopefully they will link up with perhaps Ferran, Marieia and Riffolk??