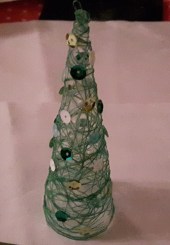 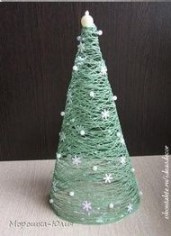 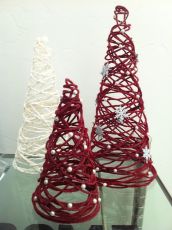 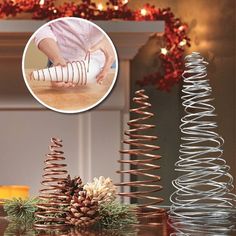 I bought a great long cone in hobbycraft some weeks back with the intention of doing this. The thread I bought was a lot thinner than I’d realised however and when I eas making it I didn’t particularly enjoy the glue on my hands so I opted to make a tiny tree instead of a big one. Since then I’ve seen turtorials where the string is pulled through a hole in the lid of a jar which would seems remarkably clever! So, I’ll be doing that next time.

For this you’ll need:
thread/yarn/string
PVA glue
Some kind of cone
Sequins/beads 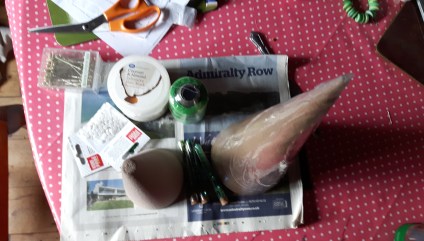 I had two cones – one presented to me by my mother – I used the tall cardboard one I’d covered in stickyback plastic. or at least the top 1/4th of it. I cut lengths of the thread and dipped it in the glue, then pulled it out. Each new piece I started at the top so that the end could be held in place while I wrapped the rest around. I also made sure when the end was reached it overlapped a place where several strings crossed to make it secure. I kept doing this until I was happy with the amount of thread and overlap – early on I wound a piece of thread around and around where I wanted the base to be, sometime twirling it back up the tree and then down again to secure it to the rest of the tree. I did it early so that later thread would bind it together. 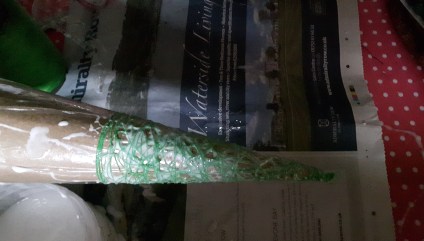 Once I had enough string and all the threads were overlapping I patted some glue over it all to make sure it was all covered. Then I left it to dry for a few hours. I worried, when trying to get it off the cone that is was very stuck, but I was able to move each section and slowly it came off. 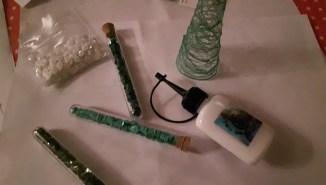 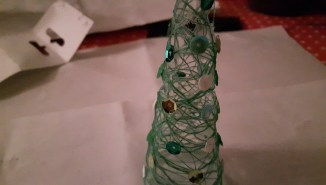 Then I used cosmic shimmer – super sticky glue – and some tweezers to stick on the sequins. I was worried they’d be too big on my tiny tree but they actually look really good.

This was actually a lot easier and far quicker than I thought it would be and it looks really effective too. It’s the same method to make the string ball decorations and that’s something to perhaps try next year.