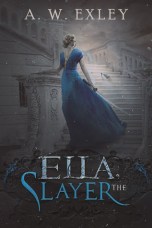 “Don’t be so daft. My favourites are Mary Shelly and Bram Stoker.”
“Why such dark authors?”
“Because monsters are real. And in their words, I find a way forward.”
- page 48

The flu pandemic of 1918 took millions of souls within a few short weeks.
Except it wasn’t flu and death gave them back.
Seventeen-year-old Ella copes the best she can; caring for her war-injured father, scrubbing the floors, and slaying the undead that attack the locals. ‘Vermin’ they’re called, like rats they spread pestilence with their bite. Ella’s world collides with another when she nearly decapitates a handsome stranger, who is very much alive.
Seth deMage, the new Duke of Leithfield, has returned to his ancestral home with a mission from the War Office — to control the plague of vermin in rural Somerset. He needs help; he just didn’t expect to find it in a katana-wielding scullery maid.
Working alongside Seth blurs the line between their positions, and Ella glimpses a future she never dreamed was possible. But in overstepping society’s boundaries, Ella could lose everything – home, head and her heart…

This seems to be the start of a series, though I’ve so far found no indication of a book 2.

This was an interesting book and I rather enjoyed it – though I found the ending to be odd. Why didn’t she tell him?! She better do it sooner rather than later!! Even though she hasn’t, depending on how well the other thing went, I have high hopes that wont be so bad either. Don’t dash them!!!

I found this book refreshing and new. It reminded me of the trailers for the film of Pride and Prejudice and Zombies and having liked this book it’s given me more of an inclination to read that before the film come out in February. I’ve also bought another book by A.W to try too!

I liked al the characters, except for the ones I wasn’t supposed to of course. But the ending did seem a little rushed after the slow build and of course, it’s the usual issue I have when reviewing book 1 = the story isn’t ended, how can I possibly review accurately?!

A good intro to a new dark fairytale series. Will part two be another fairytale – beauty and the beast perhaps? – or simply a continuation of Ella and Seth’s story?