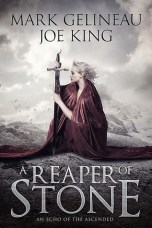 Thank you to Netgalley and the authors for a chance to read this book in exchange for an honest review.
Publish date: 15th September 2015

A Reaper of Stone is the thrilling first novella of the fantasy series of the same name. It is a rich, twisting tale with all the elements of a classic, epic fantasy story, in a tight, fast-paced, 90-minutes. Reviewers compare it to Game of Thrones and the works of Joe Abercrombie. It is recommended for readers who enjoy epic fantasy, myth and legend, and/or stories with a strong female protagonist.

A Lady is dead. Her noble line ended. And the King’s Reaper has come to reclaim her land and her home. In the marches of Aedaron, only one thing is for certain. All keeps of the old world must fall.

Elinor struggles to find her place in the new world. She once dreamed of great things. Of becoming a hero in the ways of the old world. But now she is a Reaper. And her duty is clear. Destroy the old. Herald the new.

I started to read this around the time Ms4Tune was reading it too – a blogging faux pas! Luckily we realised soon enough and I switched to a different book. But because I’d started, there’s not such a big gap between these reviews.

(Ms4Tunes review can be found HERE, I’m yet to read it.)

On Netgalley this is called the first of a series. The next book is apparently also the first in a series, yet on goodreads they are all part of An Echo of the Ascended which is all confusing. On closer inspection they also all seem to be the first books in their own series too. Which I’m glad about, because book 2 in An Echo of the Ascended is NOT about Elinor and if that was book 2 I wouldn’t be impressed. Besides, book two of her tale is apparently called Broken Banners not Rend The Dark. Did that make sense? Good, you’re about where I am with this then.

Elinor is a believer in the old ways, though she is stuck living in the new. Something happens to reform be belief in the old and she throws herself into the defence of it. What happens next is something I’m invested in. The world building is a little vague but strong – a good excerpt designed to keep you interested enough to go forward. I’d love to find out more about Elinor’s world. It will be interesting to see if her world is the same as the next protagonist. Yes, I know that they’re set in the same world but time lines and class and background and even locations and how the characters perceive everything can make the same world seem so vastly different.

I look forward to finding out how Con and Elinor’s friendship works, it seems a little odd – they had an interesting meeting! I also look forward to learning more of Elinor herself, what drives her and where she’s going. And I have to say, the horrors below the grass remind me of Tremours – a favourite series of films. The promise of a country of corrupt nobles also puts me in mind of a recent favourite series of mine by Sabastien De Castell. If this series becomes half as epic as those, it will be epic indeed.