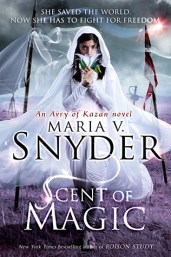 “If you had died, I would have killed you.”
“You know that doesn’t make sense, right?”
“Nothing about that time made sense.” – page 16

Despite all odds Avry survived the plague that killed every healer to attempt to heal it. Using the assumption of her death as cover she heads to the front of the war alone to collect information on the enemies army of undead soldiers as well as the army they propose to join in the fight against this unnatural threat. Outnumbered and alone she must forge new friendships to get her through these lonely times whilst worrying about those she loves. But it’s not all bad news…

Well, I’m not sure how I feel about this book and I’ll explain why. All was merry, I couldn’t put it down but I had to go out so I tried to finish reading it, I failed. So half way through getting ready I snuck off and skimmed the end, then I snuck off and peeked at the start of the next one, THEN I snuck off and peeked at the very end. So really I ruined the whole thing for myself. And the review. Also, still smarting over the stupid drama in other books, I think I’m over sensitive to it right now.  So having burst the frantic reading bubble I had a few days to mellow and apparently I can’t remember some of the minor characters now. Whoops….
So yeah, annoyed at myself for all that stuff and how I think it’s impacted my perception of the book, I really cant give it more than 4 stars.

This book is told in a duel point of view, because the two main characters split up to be of the most use. This is a pattern that can also get annoying with repetition. You’d think I’d appreciate it considering how much autism is in my life, but apparently not. Come on Maria, write the story, don’t fit it to a pattern.
STILL no idea what’s up with the two types of giant lily. REALLY WANT TO KNOW!!! And the bad guy Tohon is a serious creep. About to meet another bad guy I think. No rest of the wicked is an inaccurate saying, seems to me the good are the ones that get no rest, the wicked set others to keep it up and go rest….