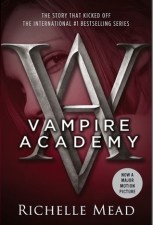 “Like beating-her-up kinds of things.”
“Oh God. That’s horrible. And she…she just let it happen?
“She did. But I didn’t.”
“Tell me, tell me you beat the crap out of him.”
His smile grew “I did.”
- Chapter Thirteen

Only a true best friend can protect you from your immortal enemies . . .
Lissa Dragomir is a Moroi princess: a mortal vampire with a rare gift for harnessing the earth’s magic. She must be protected at all times from Strigoi; the fiercest vampires – the ones who never die. The powerful blend of human and vampire blood that flows through Rose Hathaway, Lissa’s best friend, makes her a dhampir. Rose is dedicated to a dangerous life of protecting Lissa from the Strigoi, who are hell-bent on making Lissa one of them.
After two years of freedom, Rose and Lissa are caught and dragged back to St. Vladimir’s Academy, a school for vampire royalty and their guardians-to-be, hidden in the deep forests of Montana. But inside the iron gates, life is even more fraught with danger . . . and the Strigoi are always close by.
Rose and Lissa must navigate their dangerous world, confront the temptations of forbidden love, and never once let their guard down, lest the evil undead make Lissa one of them forever . . .

Before this book came out in the cinemas as a film, Ms4Tune and I made some vague plans to alternate book/film adaptions. One would read a book first and the other see the film first and then compare notes. Apparently this was one of them, though we didn’t get very far this deal. Ms4Tune read this book, the film came out and we didn’t go and see it. I read Divergent, we went to see it…and then that was it. One too many challenges I feel. (Ms4Tune’s review of Vampire Academy can be found HERE)

I’ve desperately wanted to read this book since I saw the film, sometime in the middle of last year, though before the film I wasn’t so bothered. I really enjoyed the potential the film had (having put off seeing it) except for some little bits that felt like they were sort of just tucked in. I thought that they’d perhaps not be in the book and it would flow that tiny bit better. I was right!
I was surprised at how close to the book the film had been – there were things in different places or things that didn’t happen at all and even things that had to be explained away in a different manner to keep the age rating down. Though I bet if I’d read the book first I’d not think they were so close, I’d probably be annoyed but never mind.
Of course, the problem with seeing the film first means I can’t stop imagining the actors, which is annoying as some of them don’t fit with their original counterparts from the book quite as well as one would have hoped.

I liked book Rose best. She seems a lot more balanced even while being reckless which sounds like an oxymoron but really isn’t. Since the book is from her point of view, you clearly understand her a lot more, but while more happened to her in the book, she seemed less put upon, she took it in stride and regarded it as her job and seemed to deal better. You can see that she has a lot of potential, she manages to catch up with the others pretty quickly, especially when she decides to take it seriously. Oddly, it wasn’t that she wasn’t taking it seriously before, but more that she suddenly realised she was coasting and that she could get further faster if only she pushed herself. But she’s also still only 17 and that came across sometimes too, which is also really good because it makes her seem more real.
She’s got a chip on her shoulder and she’s a little too eager and impatient,though once she’s sorted that, I think she’ll be just as impressive as her mentor Dimitri and they’ll make a formidable team, in combat mode and out. I also liked how, while she found Dimitri hot, it wasn’t love at first sight and a lot of the attraction between them was for the people they were and how they seem to understand each other in ways no one else understood them.  Not a fan of forbidden love so much because: heartbreak. But this one isn’t for any stupid reasons and the solution for it has to be pretty good! There better be a solution….
It was interesting to see things from Lissa’s point of view sometimes too, but through Rose and their bond. I also liked how Rose was able to admit when she was wrong and salvage something important. I hope it stays salvaged because Lissa and Christian are good together. For each other and for the future of their world. Here’s hoping this works out too.

Unfortunately this review has a lot of film/book comparisons, I tried to minimise it as best as I could, but it was on my mind the whole time I read it so understandably it’s a big part of my review. I would of course recommend reading the book first. I think the scope was lost by watching the film first.

It seems the film also actually did a good job of including most, if not all, the back story! This did mean that there was little to no surprise for me reading this book, but I enjoyed it all the same. I don’t know why I’ve waited so long to read them! Perhaps because somewhere in my mind they sort of merged with the Morganville Vampire series and I wasn’t so impressed with that, having read the first book (Although apparently I gave it 4 stars on goodreads but I filed it under ‘found boring’). No  matter, onto uncharted waters in book 2!

EDIT: Please note, I’ve since watched the film again. It’s not as good an adaption as I first  thought, which is disappointing. And the Rose character is off a little and too many things were revealed that shouldn’t have been! Why do they do this in films? They shoot themselves in the foot with regards to the sequels…