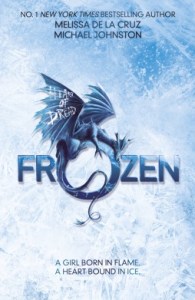 Thank you to Netgalley and the authors for a chance to read this book in exchange for an honest review.
Publish date: 2nd October 2014

Welcome to New Vegas, a city once covered in bling, now blanketed in ice. Like much of the destroyed planet, the place knows only one temperature—freezing. But some things never change. The diamond in the ice desert is still a 24-hour hedonistic playground and nothing keeps the crowds away from the casino floors, never mind the rumors about sinister sorcery in its shadows.

At the heart of this city is Natasha Kestal, a young blackjack dealer looking for a way out. Like many, she’s heard of a mythical land simply called “the Blue.” They say it’s a paradise, where the sun still shines and the waters are turquoise. More importantly, it’s a place where Nat won’t be persecuted, even if her darkest secret comes to light.

But passage to the Blue is treacherous, if not impossible, and her only shot is to bet on a ragtag crew of mercenaries led by a cocky runner named Ryan Wesson to take her there. Danger and deceit await on every corner, even as Nat and Wes find themselves inexorably drawn to each other. But can true love survive the lies? Fiery hearts collide in this fantastic tale of the evil men do and the awesome power within us all.

Frozen was my first read of 2016 and has left me feeling a little befuddled. I loved the world-building and the concept of how the world changed into a frozen landscape due to our greed and misuse of it, and I loved the main characters, Natasha, Wes and especially Shakes. So why am I left feeling befuddled?? Well mainly because every-time an action scene appeared I thought ‘Yes! This is it!’ and then, it wasn’t… it kind of just fizzled out. They got chased by searchers, they got away, they hit a trashberg, Wes wiggled the stirring wheel and they were ok, they got caught by pirates and kept hostage for days,weeks almost, but we hardly saw any of it! It’s like someone cut out all the best bit! It’s the weirdest thing. I felt for the characters, and I really enjoyed the development but it’s like someone stole the climax every-time and I was left feeling frustrated!

There was a really lovely romance that developed between Natasha and Wes. We got to see them start to trust each other and, even though they tried to fight it, we saw them slowly open up to one another and fall in love. I felt the romance and the world building were the best bits of Frozen and kind of wish it had just been a sci-fi romance, I think that would have been far more successful. Unfortunately there seemed to be some sort of quest thrown into the fray but I didn’t feel there was enough detail about the magical world to make this work. In truth it felt more like a delusional idea that they were blindly clinging too. If there had been more magic used during the story perhaps I would have found this more believable and willed them on a bit more.

What I found most disappointing was that the fantasy aspect of the story was the focus of the ending. I didn’t feel there was enough of an explanation for Natasha’s monster inside and so found the ending really confusing. I didn’t get how she suddenly knew she could save everyone and how to control the monster.

In the end I think there was just to much going on with not enough explanation or follow-through for me to really engage with the story. I may check out book two, Stolen, if I have time sometime in the future.