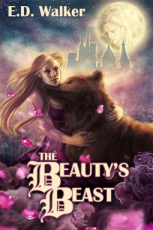 THANK YOU TO NETGALLEY AND THE PUBLISHER FOR A CHANCE TO READ THIS BOOK IN EXCHANGE FOR AN HONEST REVIEW.
Published: 14th March 2014

Lady Kathryn’s father sends her to court to find a husband, but being penniless and disinterested doesn’t bode well for her success. Bored by the petty intrigues of court, her frustration and loneliness are eased when the king charges her with the care of his newest acquisition: a wolf he and his hunters have recently captured. What the king doesn’t realize is his remarkable pet was once Gabriel, his favorite knight, cursed into wolf form by an unfaithful wife.

The beast’s uncanny intelligence and human-like behavior convince Kathryn that he is more than what he seems. Resolving to help him, she doesn’t count on the greatest obstacle being Gabriel himself. The longer he stays in wolf form as a captive of the court, the harder it becomes for him to remember his humanity and to fight his wolfish urges to maim and kill.

Only Kathryn’s affection and determination stand between Gabriel the wolf and Gabriel the man. But when the one who betrayed him returns to court, will Kathryn’s love be enough to keep Gabriel from exacting a brutish revenge that will condemn the wolf to death?

I found this to be quite a unique retelling of Beauty and the Beast. The Beast wasn’t a monster, he was a wolf! And Beauty wasn’t a phenomenal beauty, she was just beautiful to Gabriel (the Beast).

I love fairytale retellings, especially beauty and the beast ones and this was no exception. At just 207 pages (book length is something I’ve been paying attention to, this past month or so) it’s not a lengthy read. It could perhaps have done with some other padding – perhaps more of an elaboration on the hows and whys of Gabriel’s situation – though everything important was pretty much covered at least in passing.
The wife’s fate was rather dramatic and out there, but I didn’t care that it was possibly outlandish, it served her right and though the ending seemed a little rushed it was perhaps because the story rushed or maybe I rushed reading it….There was mention of only a month between one happening and the next, but perhaps a little after would have been nice, however I feel that if it had been any longer then my next few sentences would not be in this review:

This is what seems to be called a “clean romance.” We get us some kisses, but that’s it for excitement of the romantic nature except for the mention of a sleep over or two. There’s plenty of action for a fairytale however. Hunts and attacks and even a small amount of magic oh my! Very small amounts of magic compared to some beauty and the beast stories.

It doesn’t take long for most of the main characters to realise who the wolf is. You might think this will take away from the drama of the whole thing, except it doesn’t. In this, Gabriel is sort of the ‘damsel in distress’ not Lady Kathryn. In fact, Lady Kathryn seems to be going about the place, fixing things around her, not always intentionally either which is actually brilliant.

I do wonder if the lack of world building mean’s this will be part of a series, but so far I’ve not found an indication of this which is a shame. I’d love to see what E.D. Walker would do with some of the other well loved fairytales. I’m still waiting for a book to do to Snow White what Once Upon a Time has, maybe it’s something Walker will consider…