Instead of buying some, thought I’d make them. On my messy desk…

I got two Burt’s Bees gift sets in the sales and as I was throwing the tubes into the cardboard recycling box I suddenly realised that they’d make pretty decent pen pots with a bit of cosmetic cover up. So I decided that was what I was going to do. I decided to decorate them in the style of the previous pots I up-cycled. The blog post for which can be found HERE.

For the string wrapped one I put 4 strips of wide double sided sticky tape from top to bottom then a strip around the top edge and the bottom edge (or 4 small strips top and bottom – between the vertical strips…) I peeled the bottom strips covers off but only folded up the vertical ones and then proceeded to wrap string around the tub – constantly holding it tight so it wouldn’t sag and pressing it into the double sided sticky tape when applicable. 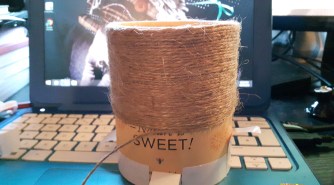 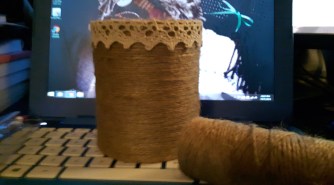 I then glued a strip of lace to the top to make it look a little fancier. I used cosmic shimmer glue – a little goes a long way and I put a line at the top and then every so often I’d dab some across and down one of the points to give it a little added security.

For the next one I pulled my roll of burlap out and wrapped it around twice, to hide the writing. The first layer was stuck with double sided sticky tape – the same as the string but, but the second received a line of glue at the top and random squiggles down. It was too long so once it was stuck I cut off the extra and added glue to stop it fraying any further, because it had started to. I then stuck a different strip of lace to the bottom – the same way I stuck the last one – to hide the frayed ends and I stuck on a burlap rose that I had. I stuck it on off centre, but it just makes it looks like it’s off centre in the picture….

For the third one, I painted it a ‘soft truffle’ colour from my collection of paint samples then I added a strip of wide lace type stuff that I had. I did this the same as the burlap and string – with the sticky tape, but I’d recommend doing it with glue as the tape shines through the holes in the lace. 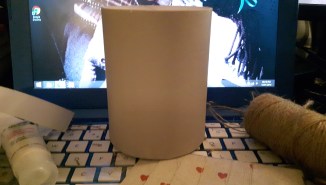 I painted it to hide the letters and only wrapped the lace around once. It started and ended on a strip of the tape and I lined them up so that the pattern flowed. I then cut off the excess because it was too big like the burlap. I didn’t glue the ends, just pressed them into the tape and then I was done.

I can’t decide what to do with the last one. I’ve recently learnt to crochet, so maybe I’ll make one of those jar covers or cover it in buttons or something?

That was a brilliant idea. I’ve been casing pen pots with the idea I need some more. Now I have 3 (possibly 4) with no cost what so ever! Brilliant.