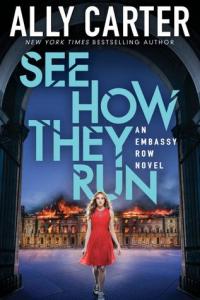 Thank you to Netgalley and the publisher for a chance to preview this book!
Publish Date: 22nd of December 2015

Inside every secret, there’s a world of trouble. Get ready for the second book in this new series of global proportions–from master of intrigue, New York Times bestselling author Ally Carter.

Grace’s past has come back to hunt her . . . and if she doesn’t stop it, Grace isn’t the only one who will get hurt. Because on Embassy Row, the countries of the world stand like dominoes, and one wrong move can make them all fall down.

The twists get twistier and the turns get even more shocking in the second thrilling installment of Embassy Row.

It’s not the worst sequel I’ve ever read but it’s not the best either. Quick question, am I the only one that finds the phrase ‘The twists get twistier…’, in the blurb, really irritating?

See How They Run continues on from where All Fall Down finished. At the end of All Fall Down, Grace had discovered the secret behind her mothers death, that her mother was part of a secret society, which was why someone wanted her dead, and that The ‘Scarred Man’/Dominic wasn’t the evil man she thought he was. This secret society is so powerful that they can make the shooting of the President look like a heartattack… With an organisation this influential breathing down her neck the last thing Grace needs to do is draw more attention to herself.

Grace spends the majority of this book moping and whining about all the guilt she feels. In book one Grace thought she was going insane, but even in her insanity she still managed to focus on uncovering who killed her mother. In this book she’s lost that focus, and just seems to wallow in self pity. Because of this lack of focus I didn’t really enjoy the first half of this book. It felt aimless and frustrating. It’s only about the 50% mark that the story starts to move in any really direction.

I was sad that there was very little interaction between Grace and her friends. I loved how close her, Noah, Megan and Rosie had become at the end of the All Fall Down, but Grace seemed to have cut herself off from them in this one. I did however, like getting to know a little bit about Jamie, her brother, who came back from military school to keep an eye on her. What I didn’t get was why he brought his friend Spence with him. Spence was easily the weakest character. He seemed to have zero personality and suddenly started to have an attraction to Grace even though she never really spoke to him. It was weird and felt fake, especially as it lead to the big fight that kicked off all of the action. There was zero chemistry between and I find that so infuriating!

I was also disappointed by the lack of development in the romance between Grace and Alexei. There just wasn’t enough time together for my liking. But there was sparks of chemistry between these two, because they had HISTORY and FEELINGS and CONVERSATIONS!  I can only hope that something big is coming for these two because they are so cute together.

I found the last half of this book a lot more entertaining. It was action packed and full of drama. There was a lot of running around and I have to say, I did find myself getting a bit confused every now and then but it was a definite improvement on the slow and depressing first half! I guess if I were to be picky I’d have liked a little more clarity. There are still so many hidden secrets that we have to need to uncover and I just felt frustrated that we’d had hardly any questions answered. Such as Who killed him and why? Can Ms Chancellor be trusted? Who are the society???

Overall I’m just a little disappointed with this one, here’s hoping book three will be epic, and how could it not be with that huge cliff hanger ending!

2 comments on “Review: See How They Run”