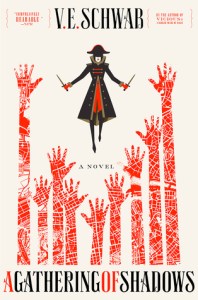 Thank you to Netgalley and the publisher for a chance to preview an excerpt of this book.
Publish Date: 23rd of February 2016

Four months have passed since the shadow stone fell into Kell’s possession. Four months since his path crossed with Delilah Bard. Four months since Rhy was wounded and the Dane twins fell, and the stone was cast with Holland’s dying body through the rift, and into Black London.

In many ways, things have almost returned to normal, though Rhy is more sober, and Kell is now plagued by his guilt. Restless, and having given up smuggling, Kell is visited by dreams of ominous magical events, waking only to think of Lila, who disappeared from the docks like she always meant to do. As Red London finalizes preparations for the Element Games—an extravagant international competition of magic, meant to entertain and keep healthy the ties between neighboring countries—a certain pirate ship draws closer, carrying old friends back into port.

But while Red London is caught up in the pageantry and thrills of the Games, another London is coming back to life, and those who were thought to be forever gone have returned. After all, a shadow that was gone in the night reappears in the morning, and so it seems Black London has risen again—meaning that another London must fall.

I knew it, I knew as soon as I clicked the request button on netgalley that I was making a mistake… yep you heard me, a HUGE mistake! Who requests an excerpt of a book that’s blatantly going to be completely and utterly awesome!!! Who does that to themselves? Me that’s who. Now I have had a glimpse at perfection and I can’t take it back. Nope, I’m doomed to sit restlessly by my letter box for 2 WEEKS to find out the rest of this story!!! 2 WHOLE FRIGGING WEEKS!!!! Possibly longer because you know what the post is like these days, and things go missing all the time. Oh god what if it never arrives??? I think this was totally and utterly unfair of the publishers to only provide me with half the book. I won’t sleep now until I’ve read the rest! (I know its my own fault really…

Things you need to know about this second instalment to A Darker Shade of Magic.

1. It’s as good, if not better than book one.
2. It’s got pirates in it!
3. Lila is still the most amazing kick-ass character ever and this is proven in the first few pages!
4. Reys is still a spoilt moaning arse
5. Kell is even more brooding than in ADSOM.
6. White London is becoming a lot less white… and it can only signify something very very bad…
7. SOMEONE is back and oh my frigging GOD I was bouncing in my seat with all the “What the hell”‘s I was shouting!
8. There is a magic tournament and I’m so excited!!

Overall, I NEED and YOU NEED this book! (And if you haven’t read book one yet… Why not?? Go read it now!)