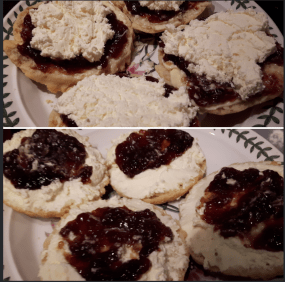 What did you just say?!

You heard me.
Lemonade scones.

So there was this video on facebook? I was told about it. You take flour and cream and lemonade and it makes scones.

I hear you laughing. I laughed too. But this is actual science. Somehow. We tried it! Here’s the picture! 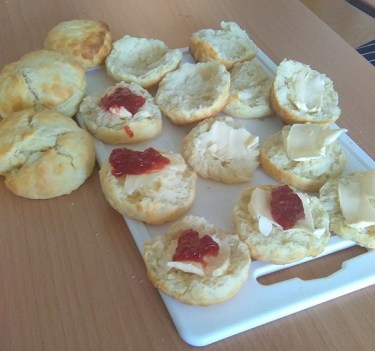 Well, I say we. I was off getting kitchen roll and soup cups, but I was sort of there! I just had no input…..

So I decided I had to make my own. Only I was making gluten free ones. This is relevant because I don’t think the flour for gluten free stuff makes very good scones. I also mention this because I don’t know if they had thick dough when they cut out the scones or if they simply rose well in the oven.

Why doesn’t it make good scones? I have no idea. But some other scones I tried with gluten free flour, (that I haven’t managed to get to work yet so the blog post hasn’t been written so you don’t know about them) did a very similar thing. They didn’t rise and they were crunchy/squeaky.

To do this you need three things. Flour, double cream and lemonade. Lemonade with sugar. You can also add a tablespoon of sugar too, but that’s optional. 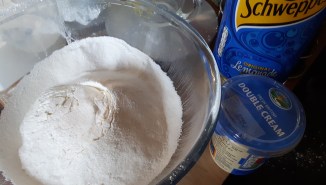 The recipe comes from Monique Bowley who was apparently a former contestant on The Great Australian Bake Off and the video was shared on Facebook by Debrief Daily. Or at least that’s the page my friend was directed to.
Her measurements are 4 cups of self raising flour, 300ml of cream and a can of lemonade.
Having now watched the video for this post, I can see she had very tall scones BEFORE they went in the oven, so that’s perhaps where I failed.

Basically you add the three ingredients to a bowl and ‘cut’ them together. You kneed the dough and then cut out circles and bake them for 15 minutes at 200oC.

Then you eat them with jam and cream!! We had no clotted cream so we improvised and beat some double cream ( a little to violently.)
Now, there are turf wars over which goes first the jam or the cream, so to stay neutral I did both… haha

CONCLUSION:
They still tasted pretty good even though I made them thin. And the science is mind boggling! I guess the cream gives you the fat content and the lemonade gives you the sugar and the fizz but wow!