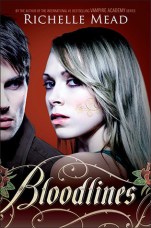 “The greatest changes in history have come because people were able to shake off what others told them to do.”
- Page 225

I wasn’t free of my past, not yet.
Sydney’s blood is special. That’s because she’s an alchemist – one of a group of humans who dabble in magic and serve to bridge the worlds of humans and vampires. They protect vampire secrets – and human lives. But the last encounter Sydney had with vampires got her in deep trouble with the other alchemists. And now with her allegiences in question, her future is on the line.
When Sydney is torn from her bed in the middle of the night, at first she thinks she’s still being punished for her complicated alliance with dhampir Rose Hathaway. But what unfolds is far worse. Jill Dragomir – the sister of Moroi Queen Lissa Dragomir – is in mortal danger, and the Moroi must send her into hiding. To avoid a civil war, Sydney is called upon to act as Jill’s guardian and protector, posing as her roommate in the unlikeliest of places: a human boarding school in Palm Springs, California. The last thing Sydney wants is to be accused of sympathizing with vampires. And now she has to live with one.
The Moroi court believe Jill and Sydney will be safe at Amberwood Prep, but threats, distractions, and forbidden romance lurk both outside – and within – the school grounds. Now that they’re in hiding, the drama is only just beginning.

I’m so very annoyed at Adrian and his victim game. I get that he’s still in love with Rose, but he really needs to get over the idea that something was done to him! Even Sydney is thinking of him as the victim towards the end of this book:

“There was still a hurting man inside, one who bore the scars of what Rose and Dimitri had done to him, but I could see the signs of healing.” – page 412

Um excuse me?! What they did to him?! I’m happy to say he did it to himself, but they’re not completely blame free – getting back together while Rose was still with him is in no way good, though their circumstances were pretty extreme. ADRIAN fell in love with Rose, knowing how she felt about Dimitri – he see’s auras, though sporadically due to alcohol use – so he has to have seen what Sonya did later on, he knew what they were to each other. He then MADE her promise to date him when she got back from er…having lost the love of her life, before he’d help her. No mourning time, nothing. And she did, she tried so hard, but really she shouldn’t have needed to. He should of respected her feelings as much as she was trying to respect his. He should also have been able to see her aura when she was with him and he should have known the difference. She owes him nothing and his attitude is aggravating me to no end.

Having said that, the last arrival in the book is kind of cruel! But having thought it over, maybe they can sort stuff out and I like him so I’m happy he’s here.

I like Sydney, she’s a lot like Rose in that she says what she thinks a lot of the time and her drive to keep everyone safe is a big part of who she is. I do miss Rose’s tendency to beat people up and general kick-arsery, but I think that Sydney will get there – just in a different way. I hate her father and I think that her sister is an idiot. I like how her relationships with all the others are developing and her fear of magic is just amusing. Despite her falling in the Adrian-is-a-victim-of-Rose trap, I like her.

I also like Adrian more than I did – I’ve known he’s in this series for a while, so his presence/personality etc hasn’t annoyed me as much as it could have because I’ve been assuming it was short lived and that he’d come into his own in this series. I’m holding out on this but I can see the changes already and I do hope they keep up!! He’s also a winner when it comes to witty one-liners and I love those.

I love seeing the return of old characters. Seeing them from another’s point of view is odd too. Seeing Rose from the outside having spent 6 books in her head isn’t actually as weird as I thought it would be. She’s pretty much the same, though because we were in her head she wasn’t putting ‘up a front’ for us, if that makes sense? Though, she was only actually there for a few pages.

The murder mystery(s) in this were  surprising and I can see there’s more surprises to come, which I can’t wait to get to! How this is all going to work out is stumping me, but that’s not a bad thing. I mean, look at that massive twist in the last series!!