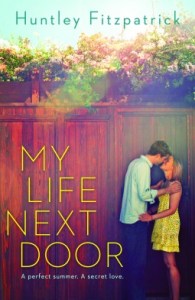 Thank you to Netgalley and the publisher for the chance to read this book in exchange for an honest review.
(Re) Publish Date: 7th January 2016

Title: My Life Next Door
Author: Huntley Fitzpatrick
Publisher: Egmont Publishers
Book: Standalone (However there is a book about Tim… so perhaps a series???)
Genre: YA, Contemporary, Romance
Found: Netgalley
Rating: 3.5 Voodoos

Popsugar Challenge #25. A book that takes place during Summer

“One thing my mother never knew, and would disapprove of most of all, was that I watched the Garretts. All the time.”

The Garretts are everything the Reeds are not. Loud, messy, affectionate. And every day from her rooftop perch, Samantha Reed wishes she was one of them . . . until one summer evening, Jase Garrett climbs up next to her and changes everything.

As the two fall fiercely for each other, stumbling through the awkwardness and awesomeness of first love, Jase’s family embraces Samantha – even as she keeps him a secret from her own. Then something unthinkable happens, and the bottom drops out of Samantha’s world. She’s suddenly faced with an impossible decision. Which perfect family will save her? Or is it time she saved herself?

A transporting debut about family, friendship, first romance, and how to be true to one person you love without betraying another.

This was such a wonderful read. My Life Next Door is a story about growing up, first loves and learning that sometimes adults don’t know what’s best. That doing the right thing can sometimes be the hardest thing you’ll ever have to do.

Samantha Reed is that good girl that always seems to just float through life without having to worry about anything. She always gets good grades and everyone loves her. She does everything her high flying politician mother tells her to do including never interacting with their rowdy neighbours! The Garrett’s are that family, the ones with the toy cluttered lawn and untidy house, the ones constantly having another baby with very little money to raise said baby. But as much as Samantha has been warned off the Garrett family (because they are ‘the wrong sort‘) it doesn’t stop her fascination with them. Samantha has spent many-a-night watching the Garrett’s from the roof outside her window. She knows everything about them without even talking to them. That is, until Jase Garrett pops up next to her one night, to says hello – obviously. From that moment on Samantha’s life changes. With her mother away so much on political campaigns and smooching a new man (who’s an arrogant arse!), Samantha is free to do whatever she wants with her Summer, which includes, getting to know the neighbours.

Samantha was a character I easily connected with. She’s quiet and a people pleaser, like me. She has that weird friend who seems to always put her down or tries out do her, in order to feel better about herself (I had one of those), and she has a high flying mother who isn’t always around to listen to her. Something I had when I was teenager. Don’t get me wrong, I love my mother to pieces but with her owning her own firm and working all hours, I realise now, that I missed out on a lot of Mother-Daughter things, (something we are rectifying now, I might add). Like Sam I meet a guy with a large, loud and supportive family, so I totally get the overwhelming feeling Sam had when she was first introduced to everyone, and I love that Huntley Fitzpatrick totally captured that feeling of being enveloped into something so big and so amazing that its hard to do anything other than accept it and get on.

There is such a wonderful emphasis on family and friendship in this book. I loved the Garrett family. My favourite member being George, just so adorable and so believably a small child! Huntley Fitzpatrick has captured every little detail of a large family, from eating together, to playing together, to sleep-time routines. From those moments of exasperation and anger to those moments of joy. Every character was well developed and fitted into place. I liked that the relationship between Samantha and Jase was one of friendship first, that slowly developed into something more. It was easy to get caught up in and feel that it was real.

I hated Samantha’s mother who, unlike my own mother, seems to break her own rules in order to get what she wants. She put herself before her own child on so many occasions that it was disgusting. The storyline has some great twists and turns towards the end but obviously I don’t want to give these away. I think my only point would be that after so much realism had gone into every other aspect of the storyline, I kind felt that the ending was a bit flat. I didn’t feel the Garrett’s reactions were big enough, especially Jase’s. He seemed so forgiving straight away and to me that felt wrong. I get that this is a YA and people like happy endings but, in real life, I doubt the ending would have been as clear cut as this was. Yes, the Garrett’s are good people but even good people get angry. Sometimes consequences are unfair and heartbreaking but that’s life! This ending will probably work for everyone else because, as I said, people like to read about something happier than real-life.

Overall, I really did like this book, it was just a few minor points that stopped me from loving this book. I will definitely be reading Tim’s story The Boy Most Likely To, as I really loved his character and would love to see how he continues to progress.