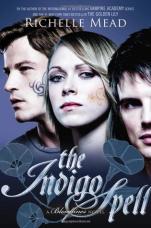 “Odd choice to run nefarious magical activities out of.”
“I don’t know. Seeing as there aren’t any ancient castles in the neighbourhood, then why not a bed-and-breakfast?”
-Page 139

Sydney Sage is an Alchemist, one of a group of humans who dabble in magic and serve to bridge the worlds of humans and vampires. Alchemists protect vampire secrets – and human lives.
In the aftermath of a forbidden moment that rocked Sydney to her core, she struggles to draw the line between her Alchemist teachings and what her heart is urging her to do.
Then she finally tracks down the elusive, enigmatic Marcus Finch – a former Alchemist who the organization denies exists, and who lives in shadows, on the run. With Marcus’s help, Sydney realizes that the group she’s been loyal to her whole life has been hiding the truth from her. Is it possible that her golden lily tattoo might have more power over her than she thinks?
As she struggles to come to terms with what that might mean, Sydney is compelled to use her magical powers to track down an evil magic user who is targeting powerful young witches. Using magic goes against everything she always thought she believed, but she realizes that her only hope is to embrace her special blood – or else she might be next.
Forging her own way is harder than Sydney ever dreamed. Maybe by turning off her brain – and following her heart – she’ll be able to finally figure out where she belongs.

My review of book two is HERE.

I think I’m struggling with this series. I don’t know why. I Don’t know if it’s not as dramatic as Vampire Academy, or if I sometimes identify with Sydney too well in some areas, or if it’s because she just isn’t Rose…Possibly it’s because she’s human? But I’m going to pause here, read another book. Have a rest so I don’t get fed up with these guys. Because even though a spanner is in the works, I think that it can still be epic! I’m also finding it hard to remember what’s happened in this book and what happened in the one before. So The break will also help me with the reviewing process. I’ve therefore placed these reviews far enough ahead so that I can post them together, in case this is important to you. You’re welcome.

This one is heavy in the witchery, which isn’t bad. It should, in fact get better after this, now that some things are broken. In my disillusioned state, I read the blurbs of the next three books and found a spoiler in a review – I don’t even know why I was looking at it – I NEVER look at them till well after! but hey, it’s not so bad and now I know there’s something 2 books away to look forward to! haha

I’m glad Sydney’s behaviour had a reason and I found Marcus hilarious. He could NOT work out why she wasn’t so in love with him it was brilliant. Though, I’m confused about his age – I thought the photograph of him was a few years old, so I thought he’d be older than her. Unless he was but just didn’t act like it? Maybe he was Adrian’s age? See? Having trouble here. Maybe this was the mid series rut and it will pick up. OR maybe too many things were going on in this book so that we didn’t really focus on anything? Seems like that’s more likely. I know things are about to get stealthy! Haha, I have no idea how anything else is going to happen now.

What I found interesting was that Eddie and Adrian had the same attitude about something, which was surprising. It’s not exactly something that you’d think they would.

I also wish we had seen more of the others in this book. It was a lot of Sydney running about the place. I’m hoping we see more Jill, Eddie and the others in the next half cause I kind of miss them.

2 comments on “Review: The Indigo Spell”