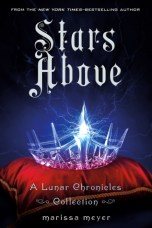 “There’s something I want to show you. Do you think anyone would notice if er slipped away for a bit?”
“Given that we make up a full quarter of the guest list, I would be a little insulted if they didn’t notice.”
-page 361

The enchantment continues….
The universe of the Lunar Chronicles holds stories—and secrets—that are wondrous, vicious, and romantic. How did Cinder first arrive in New Beijing? How did the brooding soldier Wolf transform from young man to killer? When did Princess Winter and the palace guard Jacin realize their destinies?
With nine stories—five of which have never before been published—and an exclusive never-before-seen excerpt from Marissa Meyer’s upcoming novel, Heartless, about the Queen of Hearts from Alice in Wonderland, Stars Above is essential for fans of the bestselling and beloved Lunar Chronicles.
–

The Keeper: A prequel to the Lunar Chronicles, showing a young Scarlet and how Princess Selene came into the care of Michelle Benoit.
Glitches: In this prequel to Cinder, we see the results of the plague play out, and the emotional toll it takes on Cinder. Something that may, or may not, be a glitch….

The Queen’s Army: In this prequel to Scarlet, we’re introduced to the army Queen Levana is building, and one soldier in particular who will do anything to keep from becoming the monster they want him to be.

Carswell’s Guide to Being Lucky: Thirteen-year-old Carswell Thorne has big plans involving a Rampion spaceship and a no-return trip out of Los Angeles.
After Sunshine Passes By: In this prequel to Cress, we see how a nine-year-old Cress ended up alone on a satellite, spying on Earth for Luna.
The Princess and the Guard: In this prequel to Winter, we see a game called The Princess
The Little Android: A retelling of Hans Christian Andersen’s “The Little Mermaid,” set in the world of The Lunar Chronicles.
The Mechanic: In this prequel to Cinder, we see Kai and Cinder’s first meeting from Kai’s perspective.

Something Old, Something New: In this epilogue to Winter, friends gather for the wedding of the century…

-Goodreads (rearanged to match up to book)

My review of Winter, book 4 can be found HERE.

This is about Michelle Benoit, Scarlet’s grandmother and how she came to be the guardian of a nearly dead Princess Selene. It gave us little new information, but it was a nice wrap up of Cinders life – showing us what was only previously speculation and explaining exactly where her name came from. It’s a shame she’ll never know.

This is a little introduction into the first days in the life of Cinder, living with her new step family and learning about being a cyborg.
I like this more now than I did when I read it, I was more interested in moving forward, not back but now that that frantic need to read the next book is gone, I can appreciate it more (I also read it in a rush as I was meant to be leaving the house.) I would say this could be read before Cinder, as an intro. But is also comfortably a later-read prequel.

This is a little glimpse into the life of one of the characters of Scarlet in his youth. I would recommend reading this one after Scarlet. Though, actually the suspense might be fun if you read it before….

Carswell’s Guide to Being Lucky:

This gives us some interesting insight to the early years of Thorne and makes me hope his parents ended up knowing he helped save the whole world. I’d also love them to meet Cress, just to see how that whole thing would pan out, but at the same time I’m happy for her to never meet them, she’s used to him now and doesn’t need to have him explained to her, which is lovely. This also covers one of the incidences that Cress confronts him with to prove how good he is. This wasn’t my favourite story, which I find sad because I do love Thorne at the end of it all, bit this is the before Thorne, not the after and so I can forgive him.

After Sunshine Passes By:

Young Cress! She’s even more endearing here, in the story of how she ended up on the satellite, but it’s also so sad! She was so young and trusting! I liked this more than the Thorne one, though she had a good development too, I loved her with Thorne and I wish that one of these stories was them flying around the world, saving it from sickness or something equally as epic.

The Princess and the Guard:

Young Winter and Jacin. This is perhaps the longest one on the book and it covers a large chunk of Winter’s childhood. It fits in with Fairest too. It’s the story of why Winter stopped using her gift and why Jacin stayed instead of escaping the palace with his parents.

Meyer’s version of the little mermaid - the original, which didn’t have a happy ending. An android with a faulty personality chip falls in love with a human and strives to one day tell him how she feels. I don’t know how I feel about this one, I was again reading this in a rush, so perhaps I missed something towards the end. I’m not sure what happened. I’m also not sure how it fits in, though Cinder is a background character, amusingly playing the role of ‘sea witch’. Don’t get it? Go read it.

Kai’s meeting of Cinder, from his POV. His last line is so true it’s crazy. He’s the only one we don’t have a childhood memory from. He has a small flashback in memories, but nothing so much as the others which is sad. Though, I guess the hint is that his defining moment was meeting Cinder? Who knows…It as nice, I always say it and it’s always true, I love alternate POV’s for things that are in the main books.

Something Old, Something New:

This was 100% mean. Not the wedding I was expecting, but the wedding they deserved. Shame the story didn’t cover ALL THE WEDDINGS THAT SHOULD HAVE BEEN HAPPENING!!! This is the only story that’s After the events of all the books and there wasn’t enough of all of them here. I wanted to see more of Winter and Jacin and more of Cress and Thorne too. Maybe there’ll be more? One day? Soon? Please? Hilariously Scarlet has turned into her grandmother in this, it’s brilliant.