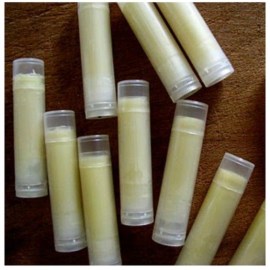 A rose scented/flavoured lip balm for the romantic season!

When I first made it, it filled 13 containers and I’d tried to make it Vanilla flavour, but I hadn’t added enough flavouring so it was pretty much Shea flavoured. This time I’ve remade it, halving the recipe, because this time it’s all mine and I font need 13 tubes of lip balm in one go….You  could make it more romantic by adding rose petals! But I’d recommend dried ones as fresh flowers and heat don’t get on. Alas I am without dried petals, so mine is simply a boring tube of balm.

I pretty much followed the above linked method, except this time I halved it and edited a few other things. I added more than just a tablespoon of beeswax with the idea I’d put in a little less shea as the first batch has become sort of scrub like on top – I’m assuming it’s the shea so I thought a little less may help. I didn’t quite remember this when I added the shea however, but I didn’t put a heaped tablespoon in or anything.

I added about 25 drops of rose flavouring this time, to make it actually flavoured! And to give it a helping hand and because the recipe says ‘essential oil’ I added about 5 drops of Rose Geranium oil too. It made me 5 and a half tubes, which set a little before I added the lids and put them in the fridge.

The time in the fridge makes it set faster, but also prevents any people or pets from knocking it over and causing it to leak everywhere. If this isn’t an issue for you, it’d perhaps be better to leave it to cool naturally.

Right out of the fridge it seems quite hard, but it gives nice coating and is definitely Rose-y. In fact my biscuit tastes like roses! It’s not unpleasant!
Maybe a full tablespoon of the shea with the extra beeswax is a better idea, but as it is I do like to press heard when applying my balms and I do keep them in my jeans pocket…