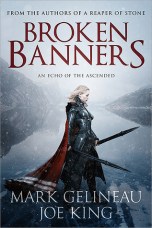 Thank you to Netgalley and the authors for a chance to read this book in exchange for an honest review.
Published: 15th February 2016

Broken Banners is a thrilling, fast-paced fantasy tale. It is the second novella of the series A Reaper of Stone. Reviewers compare it to the works of Brandon Sanderson, Sarah J Maas, and Joe Abercrombie. It is recommended for readers who enjoy epic fantasy, myth and legend, action, and/or stories with a strong female protagonist.

Slaughtered and left for crows, soldiers of the King’s Army lay dead in a field. A grim reminder: the king’s law ends at the gates of the capital.

Elinor fought for what she believed and now she is an outcast. No soldier will follow her. No officer will stand with her. Yet when she finds her brothers and sisters slaughtered, she cannot turn her back on them.

Long ago, they swore an oath. Not to the king, but to each other.

And woe to those who break that bond.

We have a problem here at P&M, we’re both reading these series, no, that bit’s not the problem, what is the problem is that we’re both wanting to read them at the same time, which would make for some very repetitive blogging. So Ms4tune’s been reading them in advance and I’ve been reading them after publication. Not to long after you understand, because I need to know! Despite it being only a few months since I read Reaper of stone, I had to recap – which is good because I thought we’d left a cliff hanger – literally – for some reason. But it’s good I recapped and then I went right into Broken banners.

And oh boy! I don’t care who I said was my favourite before, scratch all of that, because Elinor is definitely my favourite!! This book has three points of view, we have another lead character, but I don’t think much of Aldis at all – which we aren’t supposed to I guess. He trained with Elinor, but unlike her, he’s easily persuaded. Even, it seems, when he’s decided he wont be. He doesn’t seem to be a strong personality type – he’s easily lead and unlike Elinor he lets his doubts interfere. He’s a man with a job, where as it’s Elinor’s life.

I was a little confused about the fact it seemed her soldiers had abandoned her? Either I misunderstood, or I’m just not fully briefed on how this world works yet – because usually abandoning your Lieutenant gets you in trouble. But this world is still a mystery, so I’m guessing this is all something we’ll learn later.

I love Elinor. She is just one of my favourite character types. She’s assessed the world, decided what’s right and where she stands and she’s not going to be shifted. She’s one of those guys bad guys hate because they can’t bribe them. She’s honourable and brave and if you stick around long enough she’ll make you that way too, because you just can’t help but wanting to be like her. Then there’s the added involvement of the ‘Other’. Not bad other, but great other. She’s getting to live her legends and it’s fantastic, if bloody.

One complaint I have is that these stories just aren’t long enough. Oh, all the important things are there, a ‘start’ a ‘middle’ and an ‘end’, there’s a situation and it’s resolved, there’s character development and we learn about things. And I also understand that they’re designed that way and it’s a clever way to get those that struggle to read large books into the reading game, but they end just as I’m getting into them and I’m left flapping about. This is perhaps not as much of an exaggeration as it should be.