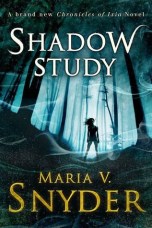 “Now’s your chance to sneak inside, watch out for guards. If you see anyone, don’t engage. We can always come back later tonight. I’ll meet you at the Black Cat Tavern”
“Get inside, avoid guards, don’t get married, meet at the cat. Got it.”
- Page 89

”Valek isn’t here.”
“She could be lying, How do we know for sure?”
“That’s easy. Put two fingers on your neck, here. Can you feel your pulse? That means Valek isn’t here, because if he was, you’d be dead. No pulse.”

This story is a prequel to Shadow Study. Ice Study tells a short story after Fire Study and another short story Power Study.
After the events of Fire Study, Yelena and Valek’s sabattical is cut short when they become entangled in a plot to prevent the Ice Moon from falling into the hands of a rogue magician.

I really enjoyed this story! It was exciting and, unlike the other novellas, didn’t seem to drag. What happens is something I’d have been concerned about, if this was me. Two powerful people from ‘opposing’ sides being used against each other. It was nice because we had Lief’s point of view for the first time! And there was some Valek and some Janco in there too. We travelled to places we haven’t been and met new people! And I really want it to snow here.

It’s set when Yelena is 23, Fire Study was when she was 21 and Shadow Study seems to be set when Yelena is 27, so there’s a big gap still. (but then I guess the glass series fits in after this?)This also comes with a nifty timeline at the end.
I’m most curious about the school of Night and Shadow!!!! Please can we have a book about this?
It also details the exact age gap between Valek and Yelena. I knew it was a big one, but it’s never seemed so. It also makes me really wish I’d read the glass books, I’ve forgotten any input these two had. 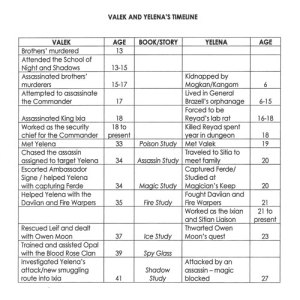 Once, only her own life hung in the balance…
When Yelena was a poison taster, her life was simpler. She survived to become a vital part of the balance of power between rival countries Ixia and Sitia.
Now she uses her magic to keep the peace in both lands—and protect her relationship with Valek.
Suddenly, though, dissent is rising. And Valek’s job—and his life—are in danger.
As Yelena tries to uncover her enemies, she faces a new challenge: her magic is blocked.And now she must find a way to keep not only herself but all that she holds dear alive.
A CHRONICLES OF IXIA NOVEL

My review of Study #3 can be found HERE and it will link back to #2 which will link to #1.

Last year, on the 29th March, Ms4Tune and I went to the book signing for this book and met Maria, ( Click HERE to read all about our time) and I STILL haven’t read it. I guess because if I don’t they can’t get into potentially life threatening situations where one or both can die. Because that can happen! Mentioning-no-series-by-name-and-thus-giving-away-spoilers, but we’ve all read at least one. I guess my idea was to wait until the last book came out and then peek at the end – This is a bad habit of mine – however, for some reason, I requested- and was granted- a review copy of book 2! So I’ve run out of time, I left myself only enough for a recap of series 1 and then to read 1 and 2 for the review to be posted on release day. I mean it too, if I put it off any longer, I’ll be writing the review minutes before it’s supposed to go live! In fact, writing this right now is a form of procrastination and I need to stop and actually go read now…..

Don’t skip the Glass books. You need to remember what happens in the Glass books or you’re a little lost. You also need to read the prequel mentioned above too. Well, you don’t have to, but the events are referenced.

Oh boy! Now there’s a new added factor, I don’t believe the gentleman originally behind all this quite realised what he was getting himself in for. Also, we don’t need a book about the school of Night and Shadow, I feel this series might just be that ‘book’. This time our time is split between Yelena, Valek and Janco. Obviously why these three will become obvious at some point. The only one in first person is Yelena still however. You do also end up with mini cliff hangers all over the place because the chapters alternate. There’s not really a calm moment and no one supervised me. I was left alone with the book and now I’m short on sleep, partly because it was excellent and partly because I needed the time! haha, I’d also forgotten how addicting these books can be.

Loved Janco! He’s brilliant, and funny and pretty damned smart, do these people realise how smart? I hope he does grow on the new recruit, though I still don’t trust her. I also wonder if Yelena’s recovery is a case of months and not weeks…she could really use that right now with what’s going on! It’s an interesting development though and I’m loving this. It’s either going to be fantastic or devastating. I opt for the former please. And with Valek, we’re getting a lot of flash backs which I’m also loving. I always like the other side of things and I’m really excited about learning more about Valek. We’ve seen a large part of his past now, I wonder what he’ll be doing next. It’s certainly going to be something spectacular.