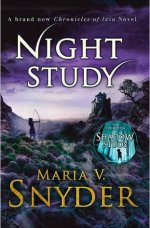 Thank you to Netgalley and the Publisher for the chance to read this book in exchange for an honest review.
Published: TODAY!!! 25th February 2016

Bestselling author Maria V. Snyder transports readers back to the realms of Sitia and Ixia in an exciting new Study novel full of magic, danger and intrigue.
Ever since being kidnapped from the Illiais Jungle as a child, Yelena Zaltana’s life has been fraught with peril. But the recent loss of her Soulfinding abilities has endangered her more than ever before. As she desperately searches for a way to reclaim her magic, her enemies are closing in, and neither Ixia nor Sitia are safe for her anymore.

My review of book 4 can be found HERE. Links are provided all the way back to book 1.

I loved it! I spent the whole read-time in a state of frantic panic! Perhaps because I was low on sleep, having stayed up late riding both Shadow Study and Night Study, but most likely because the characters were on a high adrenalin ride and I was hopping a lift because, oh boy!
In this book we loose a lot of Janco’s narrative space to Lief. Having previously bemoaned the lack of Lief, I was devastated because I was thoroughly enjoying being with Janco a third of the time in Shadow Study. It’s also sort of in two parts, but not really. We spend some time on both countries, but thinking back, it’s almost like it feels like two books. You could argue that it’s multiple, with the multiple POV’s but I like them, because it gives us a wider perspective and insight into characters other than Yelena. Except for all the mini cliff hangers, of course – which were impossible to check up on when dealing with a review copy in ebook format – if you’ve never seen one, they sometimes have formatting issues that makes skipping about harder – you can’t always see your chapter divides, though some books nicely hyperlink them from the contents page.

We have a Big Bad group in this one and it’s really big and bad! Things are not looking good for our heroes. Especially as two of them seemed to have swapped roles which is interesting and hilarious and problematic. Plus there’s some new guy’s on the team. I’m enjoying the twins and I can’t wait to see how they get on with the others. I wonder how they’ll interact with Yelena. I want a great big HAPPY family interaction too!! Please make it so. Yeah, still scared over the possible endings here! ‘Cause it’s really not looking good right now. Really not good. Luckily our guys are on the case! I’d like to throw in a rant about these people doing what they were scared about happening to them, only it’d really compromise the plot and that’s just rude, so let’s just pretend I did and that it was well presented and had several well thought out points.

We do find out who shot Yelena, we also find out why she has no magic – among other things. We also are given a whole bunch of other questions which need to have happy answers. There were also a few happenings that, while not exactly predictable, were hinted at and/or slow to be revealed so that you worked them out. I don’t know if it’s because I was being overly quick, or if it’s what I’d have done, but I don’t think this took anything away from the plot, mainly because I loved what happened!

I have to say that I’m glad I requested this from Netgalley, or I’d have waited until after Dawn Study was out and probably just let the three of them gather dust for a few years before reading them and I have to admit, as much as I love the first three books, these guys might just be better! But I’ve said it before and I’ll say it again, don’t skip the Glass series (set between the first study series and this one) in your read or re-read…Because I have no idea who half the people running about the place actually are – because I’ve read the glass series, once, five years ago. That’s way too far away, especially for me. Of course, I AM sort of jumping the gun here because we have one more book. AND That last line better not be foreshadowing. If it is, I’d like to return it please!
We need a big, epic HEA for these guys, OK?
OK.