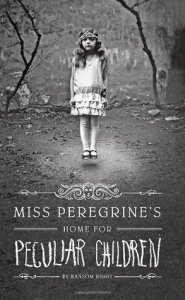 Popsugar Challenge #3. A YA bestseller

A mysterious island. An abandoned orphanage. A strange collection of curious photographs.

A horrific family tragedy sets sixteen-year-old Jacob journeying to a remote island off the coast of Wales, where he discovers the crumbling ruins of Miss Peregrine’s Home for Peculiar Children. As Jacob explores its abandoned bedrooms and hallways, it becomes clear that the children were more than just peculiar. They may have been dangerous. They may have been quarantined on a deserted island for good reason. And somehow—impossible though it seems—they may still be alive.

Miss Peregrine’s Home for Peculiar Children is all about how a boy named Jacob discovers that the stories his grandfather told him as a child, the ones about monsters and children with supernatural powers and peculiar attributes, are actually true. And that they are all stuck in a time loop on a strange island off the coast of Wales. This time loop keeps these strange people safe from monsters but their safety comes at a price. They can never leave this time loop and so are stuck repeating one day in the 1940′s over and over again, forever.

I was actually rather disappointed by Miss Peregrine’s Home for Peculiar Children. My expectations were really high because I was promised ‘A spine-tingling fantasy illustrated with haunting vintage photography’ and while I got some wonderfully eerie photographs, I didn’t really feel the spine-tingling factor from the storyline itself. In the end, for the majority of the story, I was quite bored. Most of the story focuses on Jacob travelling to Wales and exploring the island and the old house until one day he meets a girl that he recognises from one of his grandfathers pictures. This girl leads him to the past and to Miss Peregrine’s home for peculiar children and then they spend time messing around.

For about 70% of the story I didn’t really understand what was going on because Jacob wasn’t really allowed to know about why they were there, how they had gotten there and what they were. Everyone seemed to be hiding secrets from Jacob and I don’t really understand why because surely it would have been safer to tell him the truth? The story didn’t seem to have any sense of danger till much later on in the book but by then I had lost interest. This wasn’t helped by the fact that something felt disjointed about the photographs and the story. Like the story was being forced to fit the photographs rather than be enhanced by them. It’s sad because the concept was really cool, I’m just not entirely convinced it worked.

I liked the main character Jacob. I felt sorry for him because no one believed him when he said monsters killed his grandfather and as a result he was made to believe he was odd and mentally unstable. Unfortunately he was probably the only character I did like. I didn’t really like Miss Peregrine. I thought she was a bit short with Jacob and with everyone else and I thought there were perhaps too many other children because I kept getting confused between the different names.

I hear this is being made into a film and while I didn’t really enjoy this as much as I had hoped, I can see it being a really brilliant film. Some kind of hybrid of Big Fish starring Ewan McGregor and Pan’s Labyrinth with a touch of Groundhog Day

I’ll be honest and say I think my imagination just couldn’t quite encompass all the strange characters, I think I needed more visuals. So I feel the film will work better for me, I can focus more on the story that way. I will however be reading book 2 because I want to know how he plans on going home.