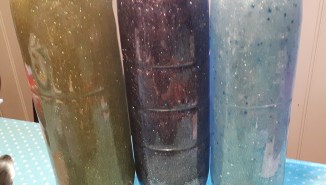 My friend Trubl instigated this one! But I’ll share what I can.

I know this came from a pin, or several pins, but I don’t know which ones so I can’t link them here.

The aim is to use the glues to thicken the water so that the glitter travels slowly through it. We filled the bottles 3/4 full of water and then tried to add the glitter glue and glue quickly. I chose purple and some blue stars. Trubl chose silver and the rest of the blue and silver stars. 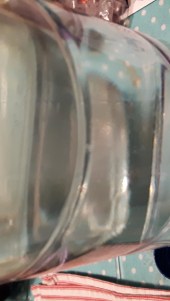 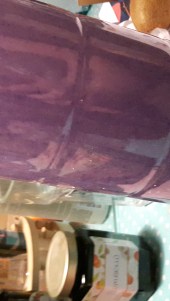 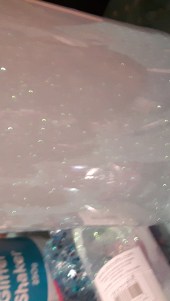 We shook the glitter glue in regularly to make sure it blended – as prior to this Trubl had had trouble (haha) getting the glue to blend in. We added the glue and discovered that the issue had been that the first batch of glue had been waterproof! That’s no use for this task and simply gives you sea monsters. 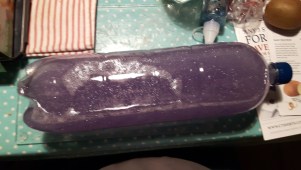 I fished out the sea monster after about half an hour of amusing my self with it swooping majestically about my bottle because it was taking up so much room I needed to fill with glue. We aren’t sure if we added enough glue to the mix because it doesn’t move very slowly. However it does take several hours to fully clear. Because we had to try warming the bottles half way through because the glue stopped mixing we made a third one by adding the glue and glitter glue and glitter to the bottle first. We used blue and gold and made it a mermaid bottle! We perhaps didn’t add enough glue and glitter glue to this one, but we didn’t want to just throw any old colour in. Adding the warm water last seemed to work just as well as the other way, though it ended up containing lumps because Trubl has issues with her hands and wrists and at this point I’d shaken two already and the movement of the third was making my migraine flair up – so unfortunately it wasn’t a completely successful test, but in theory this second way should work far better. 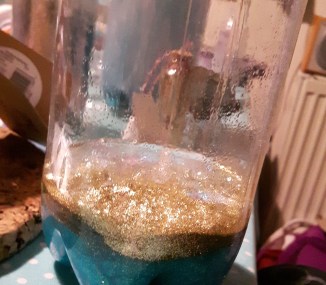 Definitely a good idea to try it on a smaller scale, easier to shake up!
Also a good idea to leave a good amount of space at the top to give you enough room to shake up the glitter settled at the bottom when you turn it over.
I’d also consider making one in a glass bottle, to be able to add hotter water and see if that helped with the glitter glue merging.

Why make this bottle you ask? Well to watch the glitter move of course! What sort of uncouth barbarian are you?! haha