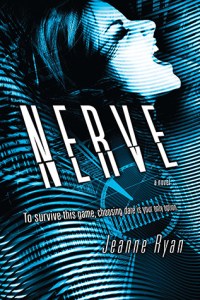 For fans of The Hunger Games

When Vee is picked to be a player in NERVE, an anonymous game of dares broadcast live online, she discovers that the game knows her. They tempt her with prizes taken from her ThisIsMe page and team her up with the perfect boy, sizzling-hot Ian. At first it’s exhilarating–Vee and Ian’s fans cheer them on to riskier dares with higher stakes. But the game takes a twisted turn when they’re directed to a secret location with five other players for the Grand Prize round. Suddenly they’re playing all or nothing, with their lives on the line. Just how far will Vee go before she loses NERVE?

Goodreads advertised this ‘For fans of The Hunger Games’. And who’s gonna pass up the chance of possibly reading the next best thing to The Hunger Games! Not me! Unfortunately, for Nerve, it’s very hard not to then compare these two books once a statement like that has been made. And it is with great regret that I have to say, for me, this was part of the reason this was a complete let down. I was instantly looking for the scare factor, something that would make me catch my breath and drag me in and get me completely immersed in the story, and this just didn’t happen. I thought it might on quite a few occasions but it got swept away in a tide of teenage angst and hormones.

I found it hard to connect with Vee, the main character, because she seemed inconsistent. Vee wanted us to believe she was a wallflower, the overlooked friend, but she was constantly the center of attention. She was ridiculously superficial, she liked Ian because he was hot, she didn’t fancy Tommy cos he was nerdy and she was constantly talking about her appearance. It was soooo irritating! She was also very materialistic. The items that she risked everything for weren’t life altering like Ian’s they were status symbols. And she was just a bitch really. She was soo envious of her best friends popularity, that she spent most of the book moaning on about her and comparing herself to her. And her best friend was actually really nice…

The dares themselves caused me some issues. The risk to reward factor didn’t seem very balanced, such as pretending to be a prostitute in exchange for a new phone with a great contract… sorry but you couldn’t offer me enough to do something like that. And to do a dare like that and then still continue the game? Nah sorry but you are insane love!

I needed more of a thriller vibe from this and what I got irritated me more than shocked me. I really liked the concept of this book but I think it was held back by its target audience and what is allowable for that audience.

The description said that this was an ‘un-putdownable suspense thriller’ and I personally didn’t experience much suspense or thrills and I definitely put this down a good number of times. If I hadn’t spent money on it I probably would have DNFed this but I pushed through to the end to be sure. Perhaps in the end, I just wasn’t in the right mood for this book or I’m just too old now for this kind of thriller to effect me anymore. I don’t know. All I know is that this book will sit on my shelves and mock me for having fallen for its cool cover and catchy taglines.