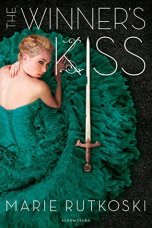 Thank you to Netgalley and the Publisher for the chance to read this book in exchange for an honest review.
Publish Date: 24th March 2016

Following the intrigue and danger of The Winner’s Curse and the revolution and romance of The Winner’s Crime, Kestrel finds herself in the tundra’s mines and Arin has sailed home. The empire seems unstoppable.

Lies will come undone, and Kestrel and Arin will learn just how much their crimes will cost them in this third and final installment in the heart-stopping Winner’s trilogy.

War has begun. Arin is in the thick of it with untrustworthy new allies and the empire as his enemy. Though he has convinced himself that he no longer loves Kestrel, Arin hasn’t forgotten her, or how she became exactly the kind of person he has always despised. She cared more for the empire than she did for the lives of innocent people—and certainly more than she did for him.
At least, that’s what he thinks.
In the frozen north, Kestrel is a prisoner in a brutal work camp. As she searches desperately for a way to escape, she wishes Arin could know what she sacrificed for him. She wishes she could make the empire pay for what they’ve done to her.
But no one gets what they want just by wishing.
As the war intensifies, both Kestrel and Arin discover that the world is changing. The East is pitted against the West, and they are caught in between. With so much to lose, can anybody really win?

I also mentioned them recently in a Top Ten Tuesday post that can be found HERE where I assigned them the theme song “Only Love Can Hurt Like This.” by Paloma Faith. It’s safe to say this song is perfect for the third book too.

This review may contain light spoilers, for this and the past two books!

But then, if you know how I like my books to end and you know how I’ve rated this book, you may have some idea about a few things, but this book was amazing and while I’m usually very careful with spoilers, today I’m gonna be slightly less concerned, because I’m talking about what I think of the book!

This book is tense. And when I re-read it there are going to be some surprises, especially in the battles – because I had to know!! So I may have skimmed some of the epic battle scenes to get through the book faster.
The only reason I didn’t check the ending for confirmation of good/bad times is because I was reading a digital version and it’s not the easiest and I didn’t wanna lose my place. Plus, I was scared!!!! I’ve started finding books with sad ending now. It’s no fun to find out that’s where you’re heading before you get there. Please don’t peek at the end of books.

I love this series, it’s highly clever and contains lots of hidden little things – which is something I enjoy. I rather liked Roshar in this book too, certainly far more than his twin! While clever, he is perhaps far more clever than he seems, for he managed to create himself a way out of a sticky situation, as if by accident! Which was brilliant.
We don’t really pick up any new characters in this book, which is sad. You’d have thought, with the company they were with, it would have been a prime time for new friendships to develop, but perhaps the book would have simply been too long if they were. It’s already close to 500 pages.

Of course, as you may know by now, I love these characters and finally, finally they get to be themselves and they get to be together and they get to be themselves together and it’s beautiful.
Something happens within this book which creates a situation and not only do they have to re-learn themselves, they have to re-learn each other as well. What’s clever is that this isn’t necessarily a set back, because they’ve never been on even footing and this time they are and it’s a place where they don’t have to hide who they are from each other or those around them. They both change a lot in this series, though I think most of Arin’s change happens before. He was set on a path from a young age and I think that meeting Kestrel saved him some, she’s always unknowingly pulled him away from the darker side of it all, just by being there. Where as Arin has helped Kestrel become who she could be, just by being himself.

This book also contains those big, future reaching sentences you sometimes see that scare the pants off you, often starting with things like; “Looking back, it was obvious” or “years later,” and sometimes “should have seen it coming…” which the first two books didn’t have, probably because this is the last and it seems that Marie is as much of a fan of – not necessarily dragging things out, but perhaps savouring them – as I am, which was just perfect.
Things also seemed to circle back, almost as though her past crosses his future, or that time doesn’t travel from a to b and crosses itself infinitesimally in tiny ways. There were all these clever little things tucked in, like comforts, to keep you going till the end. I’ve highlighted about a third of the book in my kindle app and I intend to recap them all over the next few days, just to watch them all link together again.

I love the world that this series is set in and I’d love to understand it more, if these little things here and there were the work of Arin’s gods, or if it was all coincidence simply spun around. I also want to re-read this book especially, remembering that the God of Death was the one in the Novella set at the start of this series. Having also re-read it recently I still didn’t remember until it was mentioned towards the end.

I’d love to know what happened next too, but any further books means that things weren’t working out quite so well as it was hoped. I want things to have worked out perfectly! I don’t want more war, I want peace talks and celebrations and happy surprises.
I also want to know what God Kestrel was born under. Was it the God of Lies?! Because that would be perfect.