by Janet B. Taylor 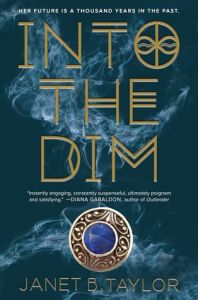 Popsugar Challenge #5. A book set in your home Country

When fragile, sixteen-year-old Hope Walton loses her mom to an earthquake overseas, her secluded world crumbles. Agreeing to spend the summer in Scotland, Hope discovers that her mother was more than a brilliant academic, but also a member of a secret society of time travelers. Trapped in the twelfth century in the age of Eleanor of Aquitaine, Hope has seventy-two hours to rescue her mother and get back to their own time. Along the way, her path collides with that of a mysterious boy who could be vital to her mission . . . or the key to Hope’s undoing.

This is another one of those books where the advertising tag line does more harm than good and I’m quite glad to see that it’s been removed from goodreads. The tag-line in case you were wondering was ‘Addictive, romantic, and rich with historical detail, Into the Dim is an Outlander for teens.’ Someone needs to be hit round the head for even trying to compare the two because Outlander is such a huge and well loved brand, that anything less than perfect would be inevitable torn to pieces by the populous and sadly I was a little disappointed with Into the Dim because of it.

Into the Dim is about a girl named Hope who is lost after her mother disappears, presumed dead. Even after the funeral Hope doesn’t know how to let go, because no body was ever found. Her father has already found a replacement and this makes Hope feel even more isolated in her grief. Hope’s father doesn’t know what to do and so decides to send her off to Scotland to stay with an aunt she hardly knows, in the hopes that seeing her mothers childhood home will help her find peace. What Hope finds is a secret lab full of period costumes and information on laylines and time periods. Hope discovers that her mother might not be dead at all, but trapped in the past. Hope must travel back in time and help rescue her mother, but can she overcome her phobias and hold her nerve long enough to help her mum?

Why was I disappointed? There were two things that failed for me, based solely on my hopes of a new and exciting teen ‘Outlander’. One was the Scottish setting. Yes, Into the Dim was set in Scotland but we didn’t really get a lot of descriptive scenic chapters or classically Scottish scenarios, in fact this could have been set anywhere, preferably not Scotland at all because some of the dialogue that was trying to show off the ‘Scottishness’ of certain characters was actually a little cringey. For me the best parts of the story weren’t set in Scotland at all but in London. The second let down was the lose of magical mystery. In Into the Dim, the portals between time periods are controlled and analysed by scientific minds. Granted these are Hope’s relatives but they all have some kind of science background. This meant that a lot of the book was spent trying to explain how they discovered it and what they understand of the time loops. I didn’t find this very exciting and as this was a large part of the book it really slowed down the whole pace of the book for me.

I didn’t really like Hope, she was very opinionated for someone who led such a sheltered life but I could forgive some of that because it seemed to have rubbed off from her mother. The main problem with Hope was she seemed rather bland other than an eidetic memory she didn’t really have anything else going for her.  I did like how her eidetic memory was useful when she went back in time though and I was surprised by the twist towards the end (the one about her and a certain boy).

I enjoyed the last third of this book. Unlike the first two thirds, which were slow and heavy, the last third was action packed, full of twists and turns and I found myself finally enjoying the story. I also liked the small romance that developed. I just wish that the whole book had been like that! It would have been much more entertaining!

This wasn’t the best time-travel book by any means, but it was ok. It had some good history points to give it some kind of Historical platform but I felt it lacked something when it came to languages, dialects and proper decorum. However saying that you’d lose a lot of Teens if you started using Old English, so perhaps not…  For the next book I think I’d like to see more description of costumes, places etc, things that really set the time-frames and I’d love to see something happen to the future, cos Hope changed a lot of things in the past and it’s hard to think that all of it was fated to happen. But more importantly I want more action. It would keep the pace moving and keep my attention more.