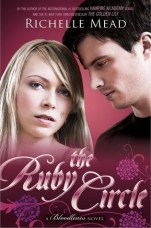 “[Maude] also apparently had a bona fide dungeon in her house.
At least that’s what Inez told me when we arrived.
Maude, overhearing as she passed by, rolled her eyes.
“It’s not a dungeon, Inez. It’s a wine cellar.”
-Page 272

THEY WILL BE TESTED

Sydney Sage is an Alchemist, one of a group of humans who dabble in magic and serve to bridge the worlds of humans and vampires. They protect vampire secrets – and human lives.

Their forbidden romance exposed, Sydney and Adrian find themselves facing the wrath of both the Alchemists and the Moroi in this electrifying conclusion to Richelle Mead’s bestselling Bloodlines series.

When the life of someone they both love is put on the line, Sydney risks everything to hunt down a deadly former nemesis. Meanwhile, she and Adrian becomes enmeshed in a puzzle that could hold the key to a shocking secret about spirit magic, a secret that could shake the entire Moroi world and alter their lives forever.

LOVE WILL CONQUER ALL

And so we reach the end. I’m a little relieved at this, but I’m surprised to realise I’d be happy to read more books set in this world – perhaps because of exactly how Richelle left this open. I stopped reading this book for a week or so to fit in some review books and I have to say the break – again – helped immensely. It also helped me work out some possible reasons why I just didn’t get on this this series as much. This weeks TTT helped too!

My main reason is that I still haven’t forgiven Adrian for the way he treated Rose. He effectively blackmailed her into a relationship and then condemned her for spending the night with her soulmate just before a life/death situation. He’s forgiven her though!!…Well, I’m sorry mate, but her feelings are just as important as yours. You made her promise and gave her no recovery time and you thought that was all ok, even though you knew exactly how she felt and why that really wasn’t ok. The only reason I never hated him was because I knew he’d get better, still, not his biggest fan.
I also didn’t like the arguments that went on between Sydney and Adrian. I know they were supposed to be part of the plot line, but there just seemed to be too many of them. Often they were the exact same one, rehashed. Multiple times. Over and over.

I enjoyed the ending and it’s build up. Sydney was a genius! But not my favourite. I think Eddie was my favourite. Also, poor Neil… I’d also like to see more of Jill. This series was about her, but not about her. It was odd. I’m assuming that any future book will be about Declan, possibly grown, so that will be 16 years after the end of this book. I hope that he’ll have siblings and Russian cousins and royal cousins and extra royal cousins. And that all his extended family will feature.

On a side note, for all the drama about The Law – we never heard it had been completed, but it must have been sometime during the climax, because they all went home. Maybe. Also, I was happy that what I thought was going to happen with somebody never did. There could be a not-quite-happy and totally-awkward reunion sometime in the future. Which would actually be something I’d be interested in reading.

Over all I preferred Vampire Academy to Bloodlines, but I don’t think I wasted my time reading this series. This is partially because I am a bigger fan of Rose and Dimitri than I am Sydney and Adrian, they just had a more interesting dynamic,  but also because it feels like more happened, possibly because it was a brand new world in series one and just an extension in series two. I think that some important world developments happened here and I think that Adrian is a far better person than he was. I like who Sydney has become and I hope that a shake up happened within the Alchemists and that the shake up at court didn’t just settle down into a scandal to be forgotten about. I also hope that if it doesn’t that Zoe can get out too. Their father was horrid and the only thing missing from the series was Adrian having to save his life. That would have put him in his place! Maybe?…Sometimes, I wonder about his tattoo. How many times has it been re-inked?!…I wonder…