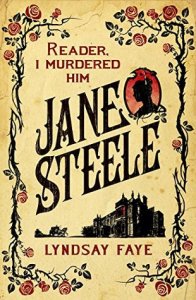 “You could tell me all and never diminish yourself in my estimation, ” Loc 3495

‘Reader, I murdered him.’ JANE STEELE is a brilliant Gothic retelling of JANE EYRE from Edgar-nominated Lyndsay Faye, for fans of LONGBOURN and PRIDE AND PREJUDICE AND ZOMBIES. ‘Great evil fun!’ R.L. Stine

Like the heroine of the novel she adores, Jane Steele suffers cruelly at the hands of her aunt and schoolmaster. And like Jane Eyre, they call her wicked – but in her case, she fears the accusation is true. When she flees, she leaves behind the corpses of her tormentors.

A fugitive navigating London’s underbelly, Jane rights wrongs on behalf of the have-nots whilst avoiding the noose. Until an advertisement catches her eye. Her aunt has died and the new master at Highgate House, Mr Thornfield, seeks a governess. Anxious to know if she is Highgate’s true heir, Jane takes the position and is soon caught up in the household’s strange spell. When she falls in love with the mysterious Charles Thornfield, she faces a terrible dilemma: can she possess him – body, soul and secrets – and what if he discovers her murderous past?

I was very late in reading Jane Eyre. It’s one of those classics I always intended to read but never seemed to have the opportunity to just pick up and get on with it. So in 2012, at 25 years of age, I forced myself to take time out of all the YA books I was reading and finally sit down and read it. I can honestly say that I loved Jane Eyre, and I say it like that because there’s always a feeling when you read a classic that you have to love it, even if you don’t. As though there’s an odd stigma attached to people who say they don’t like a classic, either they’re trying to be difficult, be different, or they missed something and are therefore someone we should feel sorry for. I’ll admit I have disliked classics in the past and felt cowed to say I did like them, but thankfully Jane Eyre is not one of them. There was one thing I noted though, when I was reading it, and that was how I thought this would have been so different if it was written today, how it could have so much more of a punch if Charlotte Bronte had written it in the 21st Century and VOILA! Here appears Lyndsay Faye with her darker, bloodier, naughtier and slightly humorous adaptation! And dare I say it… I loved this version too!

Jane Steele is written like an autobiography and makes you feel like she is talking to you because she addresses everything to the reader. I loved how she refers to Jane Eyre throughout, making comparisons of her situations and actions to Jane Eyre’s. It reminded me of my own constant comparisons to other peoples lives on social media, and like me, Jane Steele always felt like the lesser of the two. She feels like the bad one, as though Jane Eyre didn’t deserve the situations she found herself in but she did, and that made her all the more endearing to me.

The beginning of this book roughly follows the same plot line as Jane Eyre, with the death of her mother, the rejection of her extended family because of her willfulness and her being sent to a horrific boarding school. It feels familiar because of these similarities, but there’s one big difference that makes this is a much darker and more twisted version of Jane Eyre,

“Reader, I murdered him.”

All the pent up frustration I had over the injustice Jane Eyre received, is given an outlet in Jane Steele, because Jane Steele has the power to act on her need for revenge and justice! It’s odd but I found it very easy to justify her murders and I hoped she would never be found out.

There are plenty of similarities between Jane Eyre and Jane Steele but there are also differences which I feel are important to mention. For example, I enjoyed the addition of the Indian Empire. The stories of the Punjab, the inclusion of the fall out and persecution of the Sikh people by the Company, and the cultural vocabulary that came with it. It was fascinating and has sparked an interest in me for an era I find I know very little about.

There was only one issue for me and that was the pacing of the novel. Although I enjoyed the whole thing, I found the middle to be very slow. I understand that her arrival at Highgate House needed to be like a new beginning, with the introduction to new characters and a new setting, but it felt like the novel stopped and then began again, and I’d become so used to the action packed first half that I felt a little derailed. I seem to remember a similar feeling with Jane Eyre after she ran away from Mr Rochester, so perhaps this is just a personal issue but it still affected my overall rating.

Even with this pacing issue though, I must say, this is a wonderfully gothic retelling of a classic! Its fun and exciting and has you questioning your definition of whats right and wrong. I am very excited to read some of Lyndsay Faye’s other work!