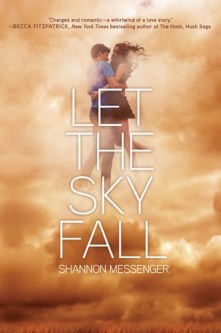 Vane lost his parents and his memories in a vicious storm when he was seven. He hates being called the miracle child for surviving the devastation and feels guilty he can’t remember anything about himself. He dreams, nightly, of a beautiful girl who grows as he does and he hopes that she’s someone he remembers from the past, hopes she’s real. Just as he’s given up hope of his fantasy girl even existing, she appears and turns his life upside down.

Audra has guarded Vane since he lost his memories and was adopted by new parents ten years ago. She feels responsible for the pain he can’t remember and will do everything in her power to make it right. If only he’d wake to his past, she could see him off to a perfect life. But time is running out, their secret location has been discovered…

I found it rather refreshing to read something different. Not just subject wise with the main characters being air elementals and not the usual vampire/immortal (or even angel!) but with the fact people didn’t fly off the handle over pointless crap. No; ‘You accidentally set fire to the house when you were two and it caused this chain reaction culminating into events you had no control over which ruined my life? HOW COULD YOU?! I CANNOT EVEN SPEAK TO YOU RIGHT NOW!!’ I can’t even begin to tell you how happy this made me. (AND NO LOVE TRIANGLE!!) And for those of you out there who can’t be doing with ‘insta-attraction’ or whatever it’s called, can rest in peace because these guys have a history! Of course, it couldn’t be perfect, Audra had to go off at the end of the book to do whatever it is she couldn’t do with Vanes help leaving him to, as the blurb for book two puts it; ‘Cover for her disappearance’…So I think I’ll wait till book 3 is out before I consider opening that can of worms…
(As long as it’s soon….)