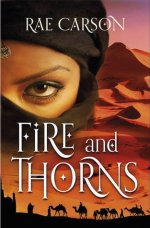 I should shower him with encouraging denial.
I should say something to give him hope.
Or I could be honest.
-Page 412

Once a century, one person is chosen for greatness.
Elisa is the chosen one.

But she is also the younger of two princesses, the one who has never done anything remarkable. She can’t see how she ever will.

Now, on her sixteenth birthday, she has become the secret wife of a handsome and worldly king—a king whose country is in turmoil. A king who needs the chosen one, not a failure of a princess.

And he’s not the only one who seeks her. Savage enemies seething with dark magic are hunting her. A daring, determined revolutionary thinks she could be his people’s saviour. And he looks at her in a way that no man has ever looked at her before. Soon it is not just her life, but her very heart that is at stake.

Elisa could be everything to those who need her most. If the prophecy is fulfilled. If she finds the power deep within herself.
If she doesn’t die young.

Most of the chosen do.

I’ve read this book before and this is what I had to say then:

Previously 3 stars March 2012:
I’ve had this book on my ‘to buy’ list for a while now so I forget what attracted me to it but I bought it the other day despite not being sure about it after re-reading the synopsis.
It wasnt easy to like to start off with, but as usual curiosity got the better of me and in the end I couldn’t put it down!
I was faintly annoyed when she fell in love with someone other than her husband – not for perhaps the usual reasons of marriage being sacred, because it was a rushed arranged marriage, but because by taking the vows she made a promise, and she did say within the story that she kept her promises, but it all worked out eventually.

This was a good and unique opening book and I look forward to reading the next.

I never read further…Having re-read this book this is what I have to say on the matter.

I saw that someone had made comment on the fact Elisa had to lose weight to be the hero, or that she had to change everything that she was, or something else similar. While I can understand some of their point – large people are people too – I think the main point here is, for a fantasy adventure, you’re not going to get very far if you’re hugely obese. In fact you’re going to struggle to get anywhere if you’re only carrying a few extra pounds or if you’re not in any way fit. So she needed to have a drastic change. While I know little to nothing of drastic weight loss, I do know that the skin does not bounce back and often you end up with skin flaps. This might just be through eating less however and not through exercise. Elisa was in a situation that required both, so I guess that could be why she doesn’t. Or it could be her Godstone…who knows?

What was nice was that while some people were repulsed by her, some saw her as a person and their view of her didn’t change as she did. What was weird though was that this world is another that conforms to modern beauty standards – in past societies, skinny meant poor and fat meant opulence.

But anyway, back to the actual review….

I enjoyed this more than I think I did the first time – possibly because I had already read it and knew it was going to be interesting. But I had also forgotten a lot of things, so much more happened than I remembered! There’s like a whole war in there! This book can be read as a stand alone if you wish to go no further. There is no cliff hanger ending and the story in this is wrapped up to a certain degree which is also fantastic. Books don’t do this enough and I do find I resent cliff hangers sometimes.

I found Elisa very relatable and I find her falling in love ‘with the wrong guy’ perfectly understandable and even acceptable this time around – considering her husband was keeping her hidden from his mistress! She’s a remarkably different person at the end of the book than she was at the start. Considering this is a trilogy too, she’s obviously got a lot more to do. My main question is, is she The End, will she live forever, or are her days limited?!

I have also discovered all the novellas are prequels, but I still plan to read them after the series.