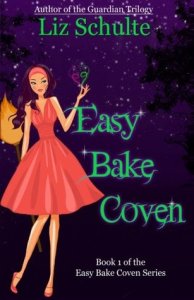 “Has he ever kissed you until you couldn’t catch your breath? Possessed you until there was no other thought in your head except for him? Set you aflame with no more than his gaze upon you?” p. 100

I think it’s fair to say that I had very low expectations for this book when I started. Many of the other reviews on Goodread’s were low and warning of likeable, underdeveloped characters, forced romance and unimaginative story lines.

So why did I pick this up? I don’t know really, I fancied a fantasy story and something not YA for a change, and so I randomly scrolled through my Kindle, and this one caught my eye. I thought why not, if I don’t like it I’ll just delete it and that’s another free kindle book off my kindle.

Selene Warren is a witch. She dabbles in harmless magic with her friends. (There are five of them in her coven all with their own special abilities.)  One day a stranger turns up at her work and talks to her like she should know him. He’s infuriating and persistent that she has to go with him. But there is something about him that pulls at Selene. Her simple life is about to become a whole lot more complicated as she discovers how she knows him, and where her witch powers come from. She’s about to be pulled into a world of elves, fae and bounty hunters!

I actually really liked this one. Yes it was slightly predictable at times and parts of the story where very ‘convenient’ but I loved Cheney and I loved the explosive romance that developed between him and Selene. It was humorous and heated. I found it believable as he knows their past but Selene doesn’t. I can imagine it would be frustrating to love someone and know they once loved you yet they can’t remember it. The romance reminded me of The Vow if I’m honest while the battle story reminded me of Breaking Dawn (with a threat on Selene’s life resulting in Cheney and Selene gathering a group of different magical beings to confront their foe). I think my only criticism would be that there were a couple of fights between Cheney and Selene that basically seemed like they were put on to make a little more conflict before the end. It had a good flow, even though the story was mainly focused on the relationship and building up the world but it kept me reading which was great.