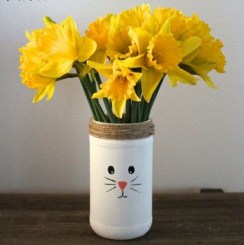 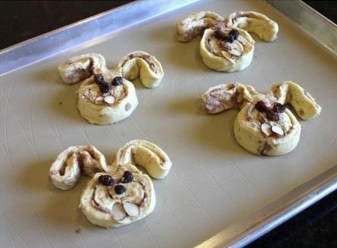 Our annual Spring Celebration time is here and so I’ve made some rabbit themed stuff, because it’s cute, that’s why.

Both are pretty easy. For the bunny jar you obviously need a jar, some paint and some pretty string! Maybe some daffodils. This bunny seems to be white, but I made three in various colours of paint I had lying around. You also need some orange and a black fine line marker.

Paint the jars – on the outside if you’re going to turn them into a vase – you’ll probably need two or three coats. Then you need to paint an orange upside down triangle on the jar and some black features. Then you just need to wrap your string around the neck and stick it down! Add daffodils as desired.

For the edible bunny rabbits, the original used cinnamon rolls, we used pain au raisin because we had some in the fridge. It’s just a case of slicing it up and unravelling it enough to fold out some ears.

I don’t know if american cinnamon rolls have more layers or if they used another slice and folded the ears and stuck them on, but the pain au raisin had very few layers. I’d consider making my own roll just to make sure I had enough to make ears. Maybe next year I’ll remember this and try it!