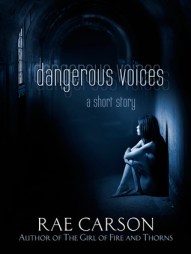 “I know what I must do. I sing of broken walls and open spaces. Of music mages pouring out of cells into boundless lightspots.”
- 90%

Errik has been a prisoner–and alone–for a long, long time. He lives for the moment each day when the window of his dungeon cell shines a bit of light onto his bearded face.

But everything changes when he gets a new neighbour–a young girl with a voice as beautiful as the springrise.

They both know the rules: No singing. No speaking. Voices are dangerous. But they can’t help themselves. And soon enough, Errik begins to remember himself, why he’s here in this dark place, and why his captors will stop at nothing to ensure his silence.

Having recently read her Fire and Thorns series, I was desperate to get my hands on something else Rae Carson. This was a free e-book via Smashwords and it was a short novella. Very short in fact. It seems to cut off and I’m not sure if there should have been more or not. Well that’s easy, there SHOULD have been more, but whether there actually was is another matter.

It’s such a little snippet and we’re left with so many questions;
Why were they there?
Who put them there?
Who were they?
What was going on?
that it’s almost an introduction to a new series. If Rae ever decides to write it, I’m game! This story was intriguing enough in the tiny bit we’re given to hook you right in.

Errik has been a prisoner so long, it’s all he remembers. But he slowly starts to recall things as his new neighbour quietly sings each day. Singing isn’t allowed, but she doesn’t care. It’s heartbreakingly beautiful, they way it’s told. You flinch away from the keys along with Errik, but in the end you find yourself soaring….until it’s cut off. Perhaps it is meant to end that way after all.