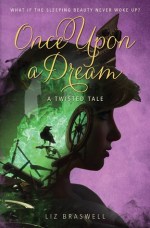 Thank you to Netgalley and the Publisher for the chance to read this book in exchange for an honest review.
Publish Date: 5th April 2016

What if the sleeping beauty never woke up? Once Upon a Dream marks the second book in a new YA line that reimagines classic Disney stories in surprising new ways.
It should be simple–a dragon defeated, a slumbering princess in a castle, a prince poised to wake her. But when the prince falls asleep as his lips touch the fair maiden’s, it is clear that this fairy tale is far from over.
With a desperate fairy’s last curse controlling her mind, Princess Aurora must escape from a different castle of thorns and navigate a dangerously magical landscape–created from her very own dreams. Aurora isn’t alone–a charming prince is eager to join her quest, and old friends offer their help. But as Maleficent’s agents follow her every move, Aurora struggles to discover who her true allies are and, moreover, who she truly is. Time is running out. Will the sleeping beauty be able to wake herself up?

My review for the first book in the series, A Whole New World can be found HERE.

This is the second book in the Twisted Tales series but they can be read as stand alone books. Each book takes a fairytale from the Disney Collection and gives it a twist. This is important to note because everything else around the twist is accurate to the Disney version so far as I can see. It’s also important to note that these books are for ages 12 and up. This explains the ‘something lacking’ I felt about the book – a deeper plot that’s more common in books aimed at an older audience is often lacking in younger themed books. I can wish that deeper plot was there to round out the book and bring it from ok to fantastic, but I am not the intended audience group and so it’s not really about me.

Of course I forgot that it was for ages 12 and up in the excitement of reading it – you don’t get many sleeping beauty retellings, lets be honest. I also read it pretty quickly as I wanted the review up today and I had a tight schedule which probably didn’t help matters. As it was, I only got to 48% before I had to put it down and locate ‘Once Upon a Dream’ in my music library. I read the rest with that playing in the background because it saved my brain from trying to hum it while reading.

I Enjoyed this more than the first book, Once Upon A Dream – perhaps because I missed the Genie in that immensely, though I did find this book confusing with all the wondering around. At one point I thought we had a bit of Disney’s Maleficent film in here too, but I was wrong.

I felt sorry for Aurora, stuck with too many memories – though her ‘you loved me because I was beautiful’ was reminiscent of The Swan Princess. I understand that today that’s not a particularly steller admission, but that’s pretty much what people married for, beauty and money.

I loved Prince Phillips father, Horrance, Huburt? Hufflepuff…whatever. He was hilarious and fantastic. Prince Phillip was pretty great too, it was nice to see him with some personality because he’s not given much in the film. Aurora pulled through in the end too – though it was a far sadder ending in the book, she had the advantage of everyone being stuck in her dream, so they knew when she said no thank you she meant business. I also loved it when the princess was complaining about how useless she was she couldn’t even do maths and the prince told her that no one could do maths in a dream, obviously, but he particularly couldn’t do Latin. I thought this was particularly funny, but despite this small revelation, it didn’t change their understanding of the world. I’d have also liked a few more random dream like things going on, but I guess that would have given the game away far too soon.

As always, I wish there was a longer ending – I’d have liked to meet Phillips siblings! I’d also have liked to see what this new Aurora Rose did with her kingdom. She brought a modern twist to the 14th Century.

A good second nook in a brilliant series for introducing the younger generation to that fantastic world of fairytale retellings. I can’t wait for the next one!